After going back and forth between the Senate and the House of Representatives, Trade Promotion Authority finally passed both chambers of Congress and was signed into law by President Obama on June 29. The conclusion of this legislation, along with an additional trade preferences bill that includes Trade Adjustment Assistance, represents a major victory for the pro-trade community and sets the stage for the finalization of two high standard trade deals – the Trans-Pacific Partnership (TPP) with Pacific rim countries, and the Transatlantic Trade and Investment Partnership (TTIP) with the European Union.

Finalizing TPA required a strong advocacy push by USCIB and other members of the Trade Benefits America Coalition, an organization of American business associations dedicated to spreading the word about the benefits of trade to U.S. jobs, growth and workers. The campaign involved many moving parts including earned media, paid media, third party engagement, grassroots activity, and consistent social media engagement. In 2015 alone, coalition members made more than 250,000 direct contacts with members of congress and their staff.

Now that TPA has passed, the business community will focus its efforts on securing a high standard TPP. TPA has given Obama the leverage he needs to close out negotiations on the free trade agreement with 11 other Asia-Pacific countries.

Read more about the trade bills President Obama signed into law on the White House Blog. 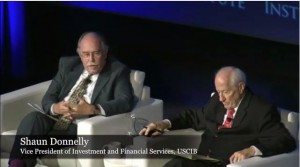 USCIB Vice President Shaun Donnelly defended the Transatlantic Trade and Investment Partnership (TTIP) at a debate hosted by the McCain Institute in Washington, D.C. on June 22. The debate, “A New Transatlantic Trade Deal: Good for America?”, focused on whether the trade deal between the United States and the European Union would be positive for American jobs, growth, labor standards and the environment.

Donnelly and former U.S. Congressman Jim Kolbe (German Marshall Fund) argued in favor of an ambitious TTIP, explaining that a free trade agreement with the EU would boost U.S. exports to $3 billion annually and increase the purchasing power of American families. They also noted that TTIP provides an opportunity for the United States and Europe to set global trade rules and provide a new template for modern trade agreements given stalled talks at the World Trade Organization.

“We face a fundamental choice…you can either recognize that globalization is here and try to deal with it and manage it, and a strong TTIP can be part of it; or we can try and deny it and turn back the clock and live in the good old days when it was a lot simpler and you could make everything in America and you didn’t have to worry about supply chains.” Donnelly said. “We have to accept reality. Nostalgia is not a strategy for competitiveness and jobs in the 21st century. TTIP is a strategy for that, and that’s what we ought to do.”

Donnelly also urged Congress to pass Trade Promotion Authority and then for the Obama administration to negotiate an ambitious TTIP that would include Investor-State Dispute Settlement, because investment is a key component of global commerce.

This entry was posted in Growth, Jobs and Open Markets, News Stories, Trans-Pacific Partnership and tagged Trade and Investment.
Modified on November 8, 2016
Posted on July 1, 2015