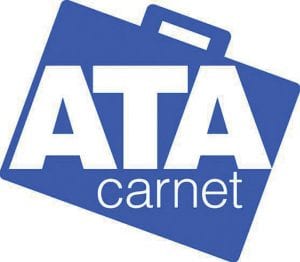 New York, N.Y., January 23, 2019 – China has significantly expanded its use of ATA Carnets for the temporary, duty-free importation of various types of goods. As of January 9, the country is now accepting the widely used “merchandise passports” for professional equipment and product samples, according to the United States Council for International Business (USCIB), which administers the ATA system in the United States.

Previously the country honored ATA Carnets just for goods destined for trade shows and exhibitions. China also extended the period for which goods may be brought into the country under ATA Carnets to a full year, from six months as had previously been the case.

“We expect China’s decision to accept Carnets for the full range of uses to significantly expand American exports to the country,” said USCIB President and CEO Peter Robinson. “Carnet usage is often a leading indicator of future exports, and this move will make the process of getting goods to and from the country much smoother.”

ATA Carnets are internationally recognized customs documents that allow for the temporary importation of various types of goods, duty-free and tax-free, generally for up to one year. They are used by a wide variety of exporters and businesses as a simple, cost-effective means of moving goods temporarily to 78 countries and customs territories around the world. Additional information on developments related to the use of ATA Carnets in China is available on USCIB’s website here.

The worldwide ATA Carnet system is overseen by the World Customs Organization and the International Chamber of Commerce (ICC), for which USCIB serves as the American national committee. Find out more about the services offered by USCIB to facilitate cross-border trade and investment at www.uscib.org.

About USCIB:
The United States Council for International Business (USCIB) promotes open markets, competitiveness and innovation, sustainable development and corporate responsibility, supported by international engagement and regulatory coherence. Its members include U.S.-based global companies and professional services firms from every sector of our economy, with operations in every region of the world, generating $5 trillion in annual revenues and employing over 11 million people worldwide.

As the U.S. affiliate of several leading international business organizations, including ICC, USCIB provides business views to policy makers and regulatory authorities worldwide. USCIB also works to facilitate international trade and investment. It is the U.S. national guaranteeing association for ATA Carnets, which enable the temporary export of many types of goods, free of import duties or taxes, for up to one year.