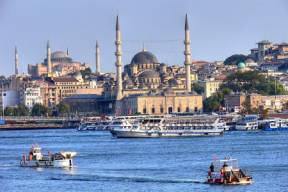 The Business-20 (B20) Trade Task Force has committed to work toward ratification of the World Trade Organization’s (WTO) Trade Facilitation Agreement (TFA) by year’s end and to work with WTO and its members to ensure quick and effective implementation. The Task Force agreed to the strategy as it met to set business priorities for G20 governments, which also includes a call on the G20 to roll back protectionist measures implemented since the 2008 financial crisis.

B20 is the premier dialogue platform for engaging global business leaders with G20 governments and leaders. B20 Turkey is chaired by Rifat Hisarciklioglu, the president of the Union of Chambers of Commerce of Turkey.

The Turkey B20 Trade Task Force held its second meeting in Istanbul on March 10. The Task Force consists of 76 company senior representatives from around the globe and is co-chaired by ICC and USCIB Chairman Terry McGraw and Guler Sabancı, chairman of Turkey’s Sabancı Holding.

The B20 group of companies unanimously agreed that the first priority is to call on all WTO countries to ratify the Trade Facilitation Agreement, which over time could contribute an additional US$1 trillion to world GDP and 21 million jobs, 18 million of which will be in developing countries. The task force outlined plans to work at the country level to convey the economic and job growth benefits of the agreement and to press for ratification and implementation.

“Governments, particularly those in the G20, must now ensure that the TFA is ratified by their national legislatures by mid-December,” McGraw said. “So far, the US is the only G20 country to ratify; and the remaining 19 must fulfill the commitments they made in Brisbane and demonstrate the leadership that comes with being part of the G20.”

The B20 Trade Task Force also agreed that the second key priority is to stop protectionism and is calling on governments to move forward to remove trade restrictive measures.

This entry was posted in Growth, Jobs and Open Markets, ICC, News Stories and tagged Trade and Investment.
Posted on March 13, 2015