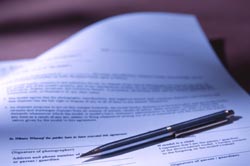 It is estimated that between ten and 15 percent of all international trade – amounting to more than a trillion dollars per year – utilizes letters of credit.  They are a tried and true instrument of global commerce – so tried and true, perhaps, that those not involved in trade finance would assume they never change.

But in international trade, as in everything, change is inevitable.  And when it comes to letters of credit, the International Chamber of Commerce, the world business organization that forms a key part of USCIB’s global network, is the instrument of that change.

Over 70 years ago, to overcome the conflicting laws on letter of credit in different countries, ICC first issued its Uniform Customs and Practices, or UCP.  Used by letter of credit practitioners worldwide, the UCP rules are the most successful private rules for trade ever developed, providing the basis for billions of dollars in trade transactions every year.

They have undergone periodic revisions to keep pace with changing usage and the fast-paced nature of global trade.  The latest such exercise recently concluded when, at an October meeting in Paris of ICC’s Banking Commission, the newest version, UCP 600, was adopted by a unanimous vote of 91-0.

The revision to ICC’s rules for letters of credit, which will come into effect on July 1, 2007, incorporates a number of changes from the previous version, UCP 500:

A very brief history of the present revision will put this into perspective.  In addition to setting the rules for letters of credit, ICC also interprets these rules when discrepancies or disputes occur.  At a 2002 meeting of the ICC Banking Commission, technical advisor Gary Collyer was asked to examine the then-current UCP500 and found that seven articles accounted for more than 55 percent of the ICC’s rulings and outline the major issues at stake.

Once a technical review had been completed, draft articles were circulated to commission members, and a consultative group made up of experts appointed by ICC national committees set up to fine-tune the new rules.

Mr. Collyer recommended bringing together the multitude of documents produced by the ICC Banking Commission under one framework, creating an environment with more certainty, not just for document checkers but also for the exporters and the nominating banks involved in letter of credit transactions.

The thrust of the successful revision has been to more firmly place the responsibility upon the issuer to state precisely what the required documents must contain, and by whom they must be issued, thereby reducing discrepancies and increasing the assurance and speed of payment.

There are several major changes in UCP 600 – perhaps the most important are reflected in their structure, as well as in the roles and responsibilities of the parties.  Regular letter of credit users will immediately recognize these as important steps, and infrequent or new users should take note – they need to learn what this is all about (see sidebar).

Mr. Smith is vice president for client services with Norman Technologies and chair of USCIB’s Banking Committee.  Write to him atdon.smith@normantech.com.

So you’re an issuer or user of letters of credit – where do you turn to learn how the new UCP 600 will change the way you do business? The author of this article has teamed with USCIB and experienced trade practice instructor Frank Reynolds to organize a nationwide series of training seminars beginning in January. Each seminar features a full day of expert instruction covering the changes from UCP 500 to UCP 600 and how they apply to actual situations, from application through presentation. Who should attend? Exporters, importers, forwarders, customs brokers, carriers, and those bankers wishing to not only learn the rules but how their clients perceive them. To learn more, click here.

This entry was posted in Growth, Jobs and Open Markets, Policy Areas, Policy Positions and Statements and tagged Banking.
Modified on May 27, 2015
Posted on December 1, 2006