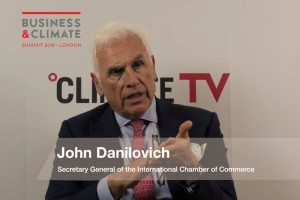 The second Business & Climate Summit – convened by a network of partners that represent over 6 million businesses worldwide – called for swifter government action on climate and the ratification of the Paris Agreement without further delay.

UK Secretary of State for Energy & Climate Change Amber Rudd MP addressed the Summit  reaffirming UK leadership on action against climate change despite the vote to leave the European Union.

“Climate change has not been downgraded as a threat,” she said. “It remains one of the most serious long term risks to our economic and national security […] as investors and businesses, you can be confident we remain committed to building a secure, affordable low carbon infrastructure fit for the 21st Century.”

The Business & Climate Summit – the annual gathering of leading global businesses and political leaders dedicated to climate action – met over two days (28-29 June) at London’s Guildhall, in the heart of the world’s leading international financial center, to address how business can, and should, continue to play a proactive role in reducing emissions and building a climate-resilient economy. Those already leading the way are putting climate action at the heart of their business strategy and reaping the economic benefits of doing so.

Achieving the goals of the Paris Agreement will require a major shift in investment away from traditional fossil fuel based energy intensive goods and services towards smarter, cleaner low carbon business models. To ensure that the objective of keeping global temperature increases well below 2°C remains possible and can be done in a way that minimizes economic disruption, this shift will have to happen immediately.

Following his role as Coordinator of the COP21 Business Dialogue, Gerard Mestrallet, Chairman, Paris EUROPLACE, Chairman, ENGIE, returned to this year’s Summit and said: “The first priority, I think, is setting carbon price signals everywhere, at levels that reflect the objectives Parties seek to achieve according to their National policies, or Regional policies, as for example for the EU ETS in Europe.”

The final day of the Summit, under the theme Finance, Innovation and Policy for The Low Carbon Transition, looked at the scale of action needed. It is estimated that $90 trillion needs to be invested globally in cities, land use and energy infrastructure – doubling current global annual infrastructure investment – between now and 2030 to help secure a low carbon, climate resilient economy.

Governments were urged to translate their ‘Nationally Determined Contributions’ into investment grade policy frameworks as soon as possible and to use carbon pricing as the most efficient way of achieving emission reduction targets.

Discussing low carbon finance and investment, Stuart Gulliver, Group Chief Executive Officer of HSBC, said: “Six months on from Paris we are much closer to being able to implement the terms of COP21 than we were at the start. The barriers to investment are lower, the call to action is louder and there is a clear willingness on the part of business and investors to change their ways and adapt their business models. Investors want to invest in sustainable projects and reduce the carbon footprint of their portfolios. With better standardisation, enhanced disclosure rules and better incentives for issuing green bonds, the COP21 goals can be met, but we must continue to work in unison and at pace with the public sector.”

Business recognizes that, with other non-state actors, it played an important role in securing the Paris Agreement and can play an equally important role in contributing to creating the policy frameworks conducive to long-term climate-resilient low carbon investments. Over the two days, the Summit heard from businesses all over the world, calling for swifter government action on climate and to work in partnership with business to achieve the necessary global policy framework.

During the final afternoon, the International Chamber of Commerce (ICC) led an International Trade Plenary. Trade and climate change have an inextricable and intimate relationship. The Summit heard from business leaders and policymakers regarding the trade policy priorities required from a climate and green growth perspective, addressing the necessary action needed at the multilateral level as well as the possible role of bilateral and regional agreements. ICC Secretary General John Danilovich said: “Open markets are the best tool we have to enhance global welfare and enable climate action.”

At the beginning of the Summit, the We Mean Business coalition and CDP (formerly the Carbon Disclosure Project) launched a report, ‘The Business End of Climate Change’ with research analysis from the New Climate Institute. It examined five global initiatives on climate action and found that under current plans, business actions will reduce emissions by 3.7 billion metric tons of CO2 equivalent a year, or 60 percent of total emissions cuts pledged in Paris by countries’ NDCs. However, business emissions cuts could reach around 10 billion metric tons of CO2 equivalent a year, well over halfway to a sub 2°C world, with the right policy environment for enhanced climate action.

This entry was posted in Business In Society, ICC, News Stories and tagged Climate Change.
Posted on July 1, 2016