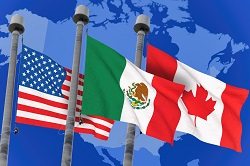 The 6th round of NAFTA negotiations wrapped up yesterday with much progress being made on a technical level in several chapters, including in digital trade and telecom. USCIB Director for Investment, Trade and Financial Services Eva Hampl was on the ground during the talks in Montreal, coordinating with member companies and associations, and meeting with negotiators from the U.S., Canada, and Mexico.

“The anti-corruption chapter is now closed out and several others are close, but are stuck on a few remaining issues,” said Hampl. The four “poison pill” proposals, which refer to automobile rules of origin, investor-state dispute settlement, government procurement, and sunset provision remain contentious, though Canada and Mexico have presented new and creative ideas in an attempt to work within the U.S. proposals, according to Hampl.

In his Closing Statement, U.S. Trade Representative Robert Lighthizer also acknowledged that some progress has been made, but that it is slow. He also highlighted some of the controversial issues, including the automobile rules of origin. Importantly, however, he noted that the United States is committed to moving forward with negotiations.

A delegation of the House Ways & Means Committee, including members from both sides of the aisle, arrived in Montreal on Friday and participated in a range of meetings and events. “Republicans and Democrats appear to be aligned in their opposition to NAFTA withdrawal,” noted Hampl. “To what extent such alignment will also translate into votes in the end remains to be seen, but the show of support was certainly important.”

USCIB will continue advocating for negotiations to progress in the right direction for U.S. business when they are expected to take place in Mexico City from February 26 to March 6.