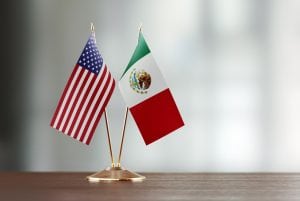 Following President Trump‘s announcement of his administration’s plan to impose tariffs on imports from Mexico, to compel the country to act more forcefully against unauthorized migration, USCIB joined a broad array of U.S. business groups in criticizing the plan.

The groups wrote in a June 7 joint statement that the plan – involving five-percent tariffs that would ratchet up to 25 percent over a period of months – would impose undue hardship on American companies and consumers, and would jeopardize passage of the U.S. Mexico Canada Agreement, the successor to NAFTA.

“We have committed to work with the administration and both sides of the aisle in Congress to support congressional passage of USMCA,” the business groups wrote. “We are supportive of the constructive discussions members of the administration have had with members of Congress. But imposing unilateral tariffs on Mexico jeopardizes a successful bipartisan vote on USMCA and approval of the agreement.

President Trump withdrew the threat of tariffs following a pledge by Mexico to increase its enforcement efforts.