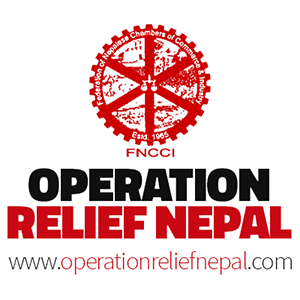 Following the disastrous earthquake that struck Nepal on April 24, ICC World Chambers Federation (WCF) is rallying its chamber members and the global business community to make donations to “Operation Relief” – an initiative of the Federation of Nepalese Chambers of Commerce and Industry (FNCCI) to provide support for relief efforts and for victims.

To support ongoing earthquake relief operations, financial support to receive wire transfers for the initiative is being channeled through FNCCI’s partnership with Everest Bank.

Conveying condolences on behalf of the world business organization and its network, ICC Secretary General John Danilovich said: “ICC stands ready to assist chambers in their ongoing relief effort in any way that we can. Our thoughts are with the people of Nepal and everyone affected by the terrible loss of life and widespread damage caused by the earthquake.”

Nepal was hit by an earthquake that caused major devastation across the country, including the capital city of Kathmandu. The huge infrastructure damage and the significant loss of lives that resulted from the catastrophe have brought unbearable pain and sorrow not only to victims and their families but the entire nation as well.

Reaching beyond their individual neighborhoods, the global network of chambers, with the support of their respective business communities, helps rebuild disaster affected communities close to and far from their own shores, bringing not only immediate assistance when disaster strikes, but remaining and working with local stakeholders to reconstruct businesses and restore economies.

“Chambers of commerce are often the first to respond when disaster strikes,” said WCF Director Anthony Parkes. “As a natural network with important connections, contacts and local knowledge they are able to act quickly to transmit aid and support to their communities where and when it is needed the most.”

Organizations in neighboring countries to Nepal have already begun lending their support, as well as other ICC WCF partner organizations such as Junior Chamber International through its initiative Operation Hope.

ICC WCF encourages donations to “Operation Relief.” More information regarding the relief program and how to contribute can be found on the dedicated Facebook page “FNCCI: Operation Relief”