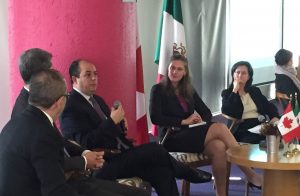 Eva Hampl, USCIB director for trade and financial services was in Mexico City last week for the 7th Round of negotiations of the North American Free Trade Agreement (NAFTA). The negotiations for this round started on February 25 and concluded with a Ministerial on March 5. U.S. Ambassador Robert E. Lighthizer, Canadian Minister of Foreign Affairs Chrystia Freeland, and Mexico’s Economy Minister Ildefonso Guajardo made statements at a press conference in Mexico on the final day relating to the relative progress of the negotiations, where three new chapters and two sectoral annexes were closed out.

In Mexico, Hampl participated in an event entitled NAFTA Negotiations Status – Current Situation & Impact Analysis hosted by the Canadian Chamber of Commerce in Mexico (CanCham) and organized by Galicia Abogados, a law firm in Mexico City with expertise in arbitration and ISDS issues. Hampl’s remarks at this event addressed the business perspective and priorities, covering the current status of the negotiations, highlighting the substantive and political difficulties, and outlining what these various developments mean for U.S. business. Hampl was joined by Salvador Behar, director for North America in the Secretariat of Economy, part of Mexico’s negotiating team and Jean-Dominique Ieraci, minister-counsellor for trade for the Embassy of Canada, and part of Canada’s negotiating team. The off-the-record remarks were followed by a discussion with the three speakers, joined by Jennifer Haworth McCandless, partner at Sidley Austin and international arbitration and trade expert. The discussion was moderated by Armando Ortega, president of the CanCham Mexico. Following the event, Galicia hosted a lunch for industry, which provided another opportunity to amplify the message about the importance of NAFTA negotiations, particularly investment protection / ISDS and the general enforceability of the agreement. The casual discussion included many questions on the U.S. political process, and the differences between the U.S. government position and business on several of the proposals.

The remainder of the week in Mexico City consisted of briefings from U.S., Mexico and Canada officials. Based on various briefings business had with negotiators from Mexico and Canada, as well as Congressional staff and others last week in Mexico, there continues to be very little progress in the poison pill or rebalancing proposals the United States has put on the table. There continues to be little progress on the sunset provision and automotive rules of origin, particularly as the U.S. negotiator on rules of origin was called back to Washington before negotiations could commence. On investment protection, Canada and Mexico have begun negotiating among themselves, and have similarly begun to do so on government procurement, which was a new development during this Mexico round.

“While valuable progress continues to be made on modernization chapters such as digital trade and customs, concerns remain that the progress on the controversial proposals is too incremental to bridge the dramatic divide between negotiating positions on a reasonable timeline,” said Hampl. “While Mexican officials emphasized prioritizing a good trade deal over a quick one, there are potential political complications on the horizon with the upcoming elections in Mexico. In addition, U.S. midterm elections are coming up later this year, something Ambassador Lighthizer raised in his press conference following the conclusion of the last round of negotiations.”

It does not appear likely that the negotiations will wrap up during the next round, which will take place in Washington DC, likely the week of April 9.

Additional challenges remain following last week’s announcement on steel and aluminum tariffs by the Trump administration. Trade proponents are hoping that, the more they learn about the possible impact of the new tariffs and likely retaliatory measures, the less voters will like them.  A new study from Trade Partnership Worldwide estimated the proposed tariffs would increase employment by some 33,000 jobs in the steel, aluminum and related industries, but cost some 179,000 jobs throughout the rest of the American economy.

Meanwhile, a new survey of likely voters in four key swing states by Firehouse Strategies and Optimus revealed that most voters underestimate the importance of trade on U.S. employment. Only 13.6 percent said their jobs depend on trade, while 69.3 percent said they do not. Most economists put the percentage at more than 20 percent when both exports and imports are factored in.