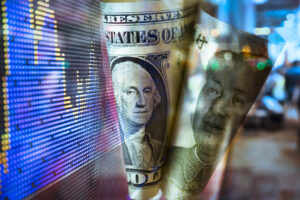 USCIB Senior Advisor Shaun Donnelly and member company Dell staffer Eva Hampl led a significant “kick-off” session for Business at OECD (BIAC) and its China Experts Group to elevate and deepen a dialogue with the OECD’s Ambassadorial-level Informal Reflection Group on China on May 3.

Representing BIAC, Donnelly led on FDI issues, focusing on both sides of the China investment coin – foreign investment into China and Chinese investment in our home countries and in third country markets.  With regards to investing in China, Donnelly highlighted business concerns over lack of a level-playing field, formal and informal discrimination against foreign investors, and a lack of effective rule of law in China. On the side of Chinese FDI in our countries, he highlighted two priority concerns, including establishing strong, targeted, and enforceable national security rules on foreign investors while avoiding investment protectionism. Donnelly also noted potential problems in competing against Chinese companies , often state-owned enterprises, which have invested in our markets can be heavily subsidized back home. Donnelly’s comments sparked a good discussion on the substantive issues and on priorities for OECD Investment Committee work going forward.

Hampl, a former USCIB policy director now with Dell’s Washington office, is Vice Chair of the BIAC China Experts group. Hampl was one of three BIAC presenters on innovation and digitalization issues, highlighting that supply chain resiliency, especially in the semiconductor sector, is at the top of global concerns with China and praising the OECD for its ability to decouple economics from politics on such vital issues. Hampl also noted the importance of engaging China constructively on a range of issues related to standards, privacy, intellectual property protections, as well as the broader issues of leveling the playing field and competition against Chinese SOEs.

According to Donnelly, other BIAC colleagues made assertive presentations on the unique challenges of competing with Chinese SOEs, especially in China, but also in the U.S. and around the world.  Several participants urged that disciplines on SOEs be added to the World Trade Organization (WTO) agenda and included in bilateral trade and investment agreements.  Finally, the climate neutrality agenda item provoked broad agreement that the OECD must play a leading role in the broader effort to enlist China constructively in the global climate effort; while much remains to be done, participants agreed that engaging China on climate should be somewhat easier now that the U.S. has rejoined the Paris Climate Accord.

BIAC Executive Secretary Hanni Rosenbaum, who led BIAC in this novel, in-depth BIAC/OECD session on China, was delighted with participation and the quality of debate. Rosenbaum sees potential for deepening and expanding the BIAC/OECD dialogue on China with new leadership coming to the OECD and a growing consensus among OECD member countries that China poses unique challenges.

“I thought it was an excellent session,” said Donnelly. “The discussion was substantive, candid and forward-looking. The four agenda items are crucial, but there are plenty of other important China-related issues where BIAC can make useful contributions to OECD’s work. These high-level, cross-cutting China discussions, hopefully to be held regularly, can complement in-depth work in specific OECD committees. There is a lot of challenging work with China and the OECD can play a valuable role in this effort.”

Alice Slayton Clark, USCIB’s new director for investment, trade and China will be leading USCIB’s work on China, both specific to the OECD and more generally, going forward. If you have issues, questions, or suggestions related to China, please get in touch with Clark.

Until his retirement from USCIB in April 2020, Shaun Donnelly led USCIB’s work on foreign investment policy, treatment of multinational and state-owned enterprises and financial services. In retirement, he now serves as a part-time Senior Advisor to USCIB leadership. A career diplomat in the U.S. Department of State’s Foreign Service, Donnelly joined USCIB’s Washington office in 2011 after a thirty-six-year career in U.S. government service. With USCIB, Donnelly became a leading spokesman around the world for U.S. and international business on international investment policy issues.
Read More