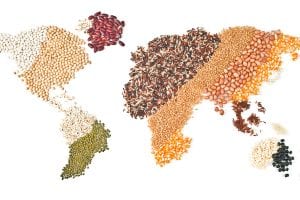 Food security has become an increasing concern among many APEC economies due to rising food prices and periods of price volatility. APEC economies are faced with challenges related to the supply and demand for food. On the demand side, economies must feed a global population that will reach an estimated 9.7 billion in 2050. Income growth and urbanization have also resulted in changing food consumption patterns in the Asia-Pacific. On the supply side, constraints to natural resources will become more stringent in the coming years, adversely impacting crops and aquaculture yields as well as the capacity to expand food production, such as fishing in the wild. Agricultural land per capita is projected to decline from its 2012 level of 0.22 hectares to 0.18 hectares in use per person in 2050, while the proportion of the population living in urban areas is projected to rise from 50 per cent to 70 per cent. In addition, increased cycles of adverse weather conditions associated with climate change will cause yield declines for some important staple food crops, particularly rice, wheat and fish products.

The APEC Policy Partnership on Food Security (PPFS) was established in 2011 to strengthen public-private cooperation to address food security issues in the region. The ministers of APEC economies responsible for agriculture and food met for the first time in Niigata, Japan, in 2010 and issued the Niigata Declaration on APEC Food Security—the first comprehensive APEC plan for promoting regional food security. Subsequent APEC ministerial meetings on food security were held biennially in Kazan, Russia (2012), Beijing, China (2014), and Piura, Peru (2016), which led to the Kazan Declaration, the Beijing Declaration and the Piura Declaration which outline APEC’s new plans for tackling food security.