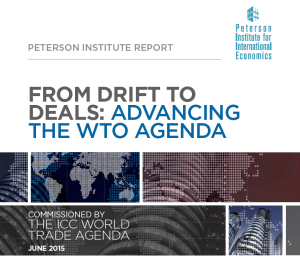 The International Chamber of Commerce launched a new report prepared by the Peterson Institute on the margins of the OECD Forum in Paris. “From Drift to Deals: Advancing the WTO Agenda, sets out a roadmap for a “grand bargain” to bring the long-stalled Doha Round of trade talks to a conclusion and restore the centrality of the World Trade Organization (WTO) as a forum for trade liberalization.”

“An immediate priority for all WTO members must be concluding the remaining aspects of the Doha Round,” said ICC Secretary General John Danilovich. “We call on governments to accelerate the ongoing negotiations aimed at paving the way for a political agreement at the WTO’s next ministerial conference in December.”

The report outlines a work program to carry out a “grand bargain,” whereby developed countries would make concessions on agriculture market access and developing countries would agree that subsets of WTO members can enter into plurilateral agreements within the WTO framework. The report also reviews nine trade realms that await liberalization and it offers recommendations for agreements on several topics at or around the WTO including the Trade Facilitation Agreement, a Services plurilateral agreement, and an expanded Information and Communications Technology agreement or “ITA II.”

This entry was posted in ICC, News Stories and tagged Trade and Investment.
Modified on June 9, 2015
Posted on June 2, 2015