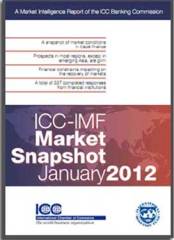 New York, N.Y., January 19, 2012 – New research by the International Chamber of Commerce (ICC) and the International Monetary Fund (IMF) has revealed a pessimistic outlook for demand for trade finance products like letters of credit in 2012, largely as the result of the Euro crisis.

Based upon input from 337 financial institutions responding to a joint ICC-IMF survey, the findings also show a two-speed financial system: For emerging Asia the outlook is the strongest, while the Euro area is the weakest. Results of the survey were released today by the United States Council for International Business (USCIB), ICC’s American affiliate.

“These results illustrate how far, and how fast, the ripples from the Euro crisis are spreading,” said Michael F. Quinn, managing director with JP Morgan Global Trade and chair of USCIB’s Banking Committee. “The withdrawal of European banks from global trade finance has had a major impact on the ability of companies to arrange for trade finance in many markets, and we expect this to continue into the future.”

Factors contributing to the negative outlook for 2012 were primarily financial constraints that reduce the availability of trade finance. This was particularly acute for large banks and those with business in developing countries. Some 90 percent of respondents indicated that “less credit or liquidity available at counterparty banks” would affect their trade finance activities either to a “large extent” or to “some extent.” This share is substantially higher than the just over 50 percent that noted the same during the 2008-2009 financial crisis.

The financial constraints appeared to reflect the large share of trade finance coming from Euro-area banks. The survey showed that recent European bank deleveraging has led to tighter lending guidelines and reduced availability of credit/liquidity. In addition, U.S. dollar funding for non-U.S. financial institutions may exacerbate the situation, since trade remained largely denominated in U.S. dollars.

Many respondents noted that one of the challenges facing the global economy was a more stringent regulatory environment – as represented by the new Basel III capital framework – which may impede a trade-led recovery. This was of particular concern, as many countries were attempting to export their way out of their currently dire economic conditions. Recent measures taken by multilateral development banks and central banks to facilitate trade were perceived to be of some help. For instance, on the issue of the reactivation of central bank swap lines, close to 60 percent of respondents indicated that the swap lines have helped, but about one fifth were not sure.

Preparation for the implementation of Basel III seems to be already adding pressure on the cost of funds and the availability of liquidity. Close to three-quarters of respondents said they felt impacted either to some or to a large extent. Specifically, by not treating trade finance as a low-risk asset class from a regulatory perspective, the new Basel capital framework could make trade finance less accessible and less affordable to exporters and importers, especially small- and medium-sized enterprises.

In these circumstances, there is an urgent need for durable solutions to be forged at the international level. “The pursuit of essential public finance and regulatory reforms is crucial in 2012 and beyond,” said Kah Chye Tan, global head of trade and working capital at Barclays Corporate in London and chair of ICC’s Banking Commission. “We caution the use of uncoordinated national initiatives and the layering of regulatory requirements which may pressure trade flows and eventually negatively impact on growth worldwide. This new ICC-IMF research calls on standard setters and policymakers to carefully study the potential unforeseen impact of proposed Basel III changes on trade finance.”

This entry was posted in Press Release. Bookmark the permalink.
Modified on January 28, 2015
Posted on January 19, 2012