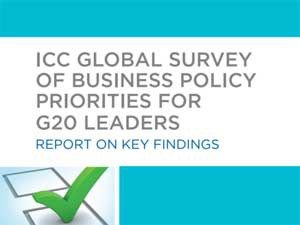 Sydney, July 16, 2014 – A global survey released today by the International Chamber of Commerce (ICC) shows that further liberalization of multilateral trade is at the top of the business community’s wish-list for G20 leaders at their summit in Australia later this year, according to ICC’s American national committee, the United States Council for International Business (USCIB).

Drawing on ICC’s unique and extensive international network of companies and associations in over 130 countries, the survey identified advancing a multilateral trade agenda, along with actions to improve conditions for investment and boost infrastructure, as top business priorities for the G20. It also found support for intellectual property protection and sustainable energy as priority issues to be addressed by G20 leaders.

“The prioritization of trade sends a clear signal that business believes that G20 leadership can progress the current momentum in international trade negotiations,” said ICC Chairman Terry McGraw, who also serves as chairman of USCIB. “In the aftermath of last year’s historic WTO agreement on trade facilitation, we now have the most robust trade agenda in decades. With a renewed sense of collaboration among the world’s trading partners, the time is right for the G20 to build upon the leadership in trade that it so ably demonstrated in Saint Petersburg.”

Launched at the 2014 Business-20 (B20) Summit in Sydney today, the Global Survey of Business Policy Priorities for G20 Leaders: Report on Key Findings, reveals that three-quarters of surveyed business representatives believe the G20 has been instrumental in improving the global business environment following the financial crisis in 2008 and remains a relevant body for addressing global economic issues.

A large majority of survey respondents said that business should be more involved in the G20 process via participation in institutionalized meetings with G20 ministers, inclusion in official issue working groups and direct dialogue with G20 leaders.

The survey solicited views from large corporations, as well as small- and medium-sized enterprises (SMEs), across a wide breadth of industries. The approximately 2,000 survey respondents come from more than 100 countries, including all G20 member countries. Significantly, the majority of the respondents were from SMEs and almost half of respondents were business owners or CEOs.

“The G20’s decisions and agenda impact core business goals for trade, investment, economic growth and job creation, and are increasingly shaping intergovernmental policies that affect business internationally,” said ICC Secretary General John Danilovich. “ICC has been deeply involved in the work of the G20, and strives to represent the voice of international business in the deliberations of G20 leaders. Our survey findings underline the importance of having a robust business-to-government dialogue on the G20 agenda.”

ICC created the Global Survey to gauge the business community’s perception of the G20 and identify business policy priorities for G20 leaders that encourage business expansion and job creation, both of which are crucial to achieving the G20’s goal of strong and sustainable growth. ICC effectively targets G20 policy development on a global scale through its G20 CEO Advisory Group, which serves to intensify top-level international business engagement and to ensure the inclusion of business views in the deliberations of G20 leaders.

About USCIB:
USCIB promotes open markets, competitiveness and innovation, sustainable development and corporate responsibility, supported by international engagement and regulatory coherence. Its members include U.S.-based global companies and professional services firms from every sector of our economy, with operations in every region of the world. With a unique global network encompassing leading international business organizations, including ICC, USCIB provides business views to policy makers and regulatory authorities worldwide, and works to facilitate international trade and investment. More at www.uscib.org.

This entry was posted in Communication Department, ICC, Latest from USCIB, Press Release. Bookmark the permalink.
Modified on January 27, 2015
Posted on July 16, 2014