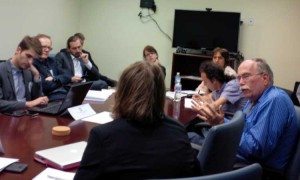 USCIB’s Washington, D.C. office hosted a diverse group of 10 journalists from around the European Union yesterday for a discussion of the state of transatlantic trade talks. USCIB Vice President Shaun Donnelly provided an in-depth analysis of key issues at stake in the Transatlantic Trade and Investment Partnership (TTIP) negotiations.

Joined by Eva Hampl, USCIB’s director of investment, trade and financial services, Donnelly emphasized American business’s strong support for an ambitious and comprehensive TTIP agreement that sets high standards in areas such as regulatory cooperation and protection of investments. He also stressed that the negotiating dynamics as well as an ultimate agreement would be different from other U.S. and EU trade pacts, owing to the relative size and sophistication of the economies involved.

“Average tariffs between our two economies are now around three percent,” he observed. “So it’s clear that the ‘easy’ issues of reducing traditional trade barriers have already been tackled. What we need to do now is address the ‘hard’ issues: making our regulatory systems work together to expand trade and investment, streamlining government procurement rules and creating a level playing field with regard to state-owned enterprises.”

Since the beginning of the TTIP negotiations in 2013, the treatment of investor-state dispute settlement (ISDS) rules in TTIP has emerged as a lightning rod for many in Europe. Donnelly reminded the journalists that ISDS was in fact a European invention, forming a cornerstone of many bilateral investment treaties and free-trade agreements.

“Investment is now a central issue in trade negotiations,” Donnelly stated. “We need strong investment rules in TTIP, both to safeguard reciprocally beneficial FDI and as a benchmark for further agreements with other countries.”

The media roundtable was facilitated by the U.S. State Department’s Foreign Press Center.

This entry was posted in Growth, Jobs and Open Markets, News Stories and tagged Trade and Investment.
Modified on July 23, 2015
Posted on July 22, 2015