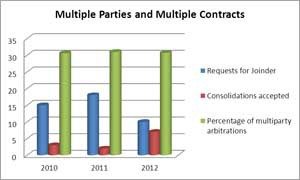 The ICC International Court of Arbitration received 759 requests for arbitration and rendered 491 awards in 2012, the first year in which the new 2012 ICC Rules of Arbitration took effect. But that’s just the tip of the iceberg when it comes to some of the intriguing statistics contained in the latest report from the Court on use of ICC arbitration.

In all, arbitration requests involved 2,036 parties, with almost 10 percent of cases involving state or para-statal entities. The last four years have seen exceptional activity, with an average of 791 cases registered per year and 473 awards given.

The Rules that became effective on January 1, 2012 were the product of a two-year review by the ICC Commission on Arbitration that sought to reinforce the Court’s commitment towards an efficient and cost-effective arbitration process, responsive to the interests and requirements of users worldwide.

The 2012 statistics underline the ICC International Court of Arbitration’s leading international position. Requests were received from 137 countries and independent territories, with arbitrations taking place in 59 countries. Arbitrators of 76 nationalities also were appointed or confirmed under the ICC Rules.

Since its creation in 1923, the International Court of Arbitration has administered more than 19,000 disputes involving parties and arbitrators from 180 countries and independent territories.

This entry was posted in Arbitration, ICC. Bookmark the permalink.
Modified on November 13, 2017
Posted on April 24, 2013