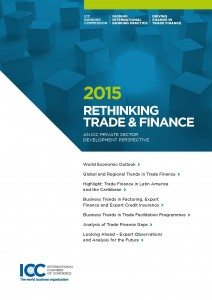 The International Chamber of Commerce (ICC) Banking Commission has released the results from its 2015 Global Survey on trade finance – highlighting the impact of the trade finance gap on SMEs, the impact of regulation on correspondent banking, as well as positive trade finance trends, particularly with regards to export finance.

“The Global Survey works as a snapshot of market trends, allowing us to compare progress from previous years and gauge global expectations,” said Vincent O’Brien, chair of the ICC Banking Commission Market Intelligence. “This year that snapshot has highlighted the severity of the trade finance gap – which continues to be impacted by regulation, despite the low-risk nature of trade finance – and particularly its impact on SMEs. This is crucial given SMEs constitute over 95 percent of all firms and account for approximately 60 percent of employment worldwide.”

The results from the Global Survey also reflected positively on export finance, with 79 percent of respondents in the industry claiming it remains a profitable business. The industry also observed a significant decrease in pricing, and even more so, fees in 2014.

“While the trade finance industry is certainly facing challenges, and the trade finance gap is a clear issue, the results from the Global Survey on trade finance show that it is not all doom and gloom,” added O’Brien. “The financial landscape is recognizing the importance of trade and, in addition to banks stating they have increased capacity to meet trade finance, we have an array of alternative lenders – such as specialist financiers, export credit agencies, and multilateral development banks – stepping up to fill the trade finance gap.”

Daniel Schmand, chair of the ICC Banking Commission, said: “New players can prove their worth by addressing the shortfall of trade finance; new or alternative financiers may support trade in areas where banks are restricted by risk appetites, regulatory burdens or stakeholder concerns.”

This entry was posted in Growth, Jobs and Open Markets, ICC, News Stories and tagged Banking.
Posted on September 29, 2015