Fresh data confirms that the International Chamber of Commerce’s Court of Arbitration is a truly global dispute resolution provider. In 2013, the court received 767 new requests involving parties from 138 countries, and 80 percent of the cases were cross-border dispute cases between parties of different nationalities. 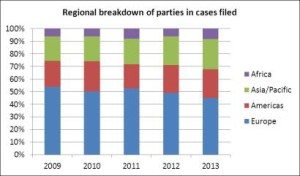 The ICC’s court is equipped with extensive knowledge of local traditions, languages and legal cultures to effectively administer disputes. The court has nine case management teams, each focused on a different region of the world. The ninth team was established in the United States last year, operating under the corporate name of SICANA with offices in the same building as USCIB.

Led by Josefa Sicard-Mirabel, SICANA is ideally located to handle the court’s growing North American caseload. The number of disputants from the United States and Canada grew by 28 percent last year. American parties continue to be the most numerous of all nationalities represented in ICC arbitrations.

A more detailed statistical report will be published by ICC in August 2014.

This entry was posted in Arbitration, Latest from USCIB. Bookmark the permalink.
Modified on November 13, 2017
Posted on July 16, 2014