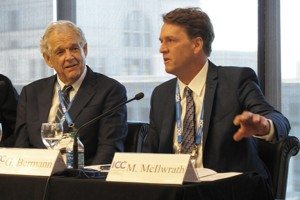 Over two hundred practicing lawyers, corporate counsels, dispute resolution practitioners and academics from around the world participated in the 11th International Chamber of Commerce (ICC) New York Conference on International Arbitration on September 14, 2016.

The high-level event proved to be a successful blend of thought-provoking discussions and stimulating networking opportunities for professionals wanting to keep pace with the latest North America arbitration trends.

The one-day conference kicked off with speeches from ICC International Court of Arbitration President Alexis Mourre and ICC Court Secretary General Andrea Carlevaris. During his address, Mourre outlined principle objectives and long-term vision for the Court.

“With more than 200 registered delegates, the ICC North American regional conference held in New York is a testament to the continuous growth of our workload in the United States, Canada and Mexico. This conference is already the main arbitration event in the region and we look forward to it becoming even more successful in the years to come,” said Mourre.

The first item on the agenda was a discussion on the series of reforms recently adopted by the Court. These changes are part of an on-going strategy that aims to modernise and enhance transparency and predictability procedures in ICC Arbitration. However, these policies bring to light questions regarding the role of an arbitral institution, its tools made available to satisfy users’ needs and appropriate methods of regulation. Expert opinions and perspectives were debated by the panel comprising leading arbitration practitioners. Each made comments as to whether or not the reforms sufficiently meet user expectations. Global Chief Litigation Counsel at GE Oil and Gas, Michael McIlwrath, said: “It feels as though the past four years have seen more changes in the practice of international arbitration than the previous 40. But more progress remains to be made.”

While simultaneous proceedings are by no means a new phenomenon, they have become increasingly more commonplace. Parallel arbitrations between the same or closely related parties; multiple arbitrations in a series of vertical contracts; civil suits in one or more courts; even criminal investigations and prosecutions have progressively turned into companions to international arbitration. The second conference panel explored how international arbitration and other dispute resolution mechanisms work together, and at times conflict, in managing the many facets of a complex case. Panellists provided insight and effective strategies to employ when dealing with such complexities.

The final panel dealt with the flaws in witness testimony. Although it is commonly presented in international arbitration, cognitive science has demonstrated the unreliability of human memory. The panel explained the contemporary scientific understanding of witness recall and whether the implications of this research present a problem in arbitration procedures. When discussing how arbitration practice can improve arbitrators’ ability to reliably determine facts, Associate Professor at John Jay College of Criminal Justice and the City University of New York, Deryn Strange, voiced her thoughts on changes that should be made. She said: “Memory evidence should be treated in similar ways to biological evidence – protected from any distorting or contaminating influence at every step of the judicial process.”

The conference concluded with an interactive mock plenary session. The exercise celebrated the Court’s inaugural working session in New York City, which took place on September 15-16, 2016. In the more than 90-year history of the Court, this is only the second occasion where the full Court met outside of its Paris headquarters – the first having occurred only recently in Hong Kong on June 30, 2016.

Court working sessions include a ‘regular’ plenary session – a monthly meeting, deciding on challenges against arbitrators and scrutinising draft awards in cases with states or state entities as parties, and draft awards reached by majority.

Court working sessions also include sessions on Court activities of the previous 12 months, and sets out objectives for the following year. Reports on the Court’s activities and future work were presented by Mourre and Carlevaris.

The two-day working session concluded with a roundtable discussion. The secretariat and Court vice presidents announced their first conclusions on the Court’s recently-introduced practices. These practices comprise communications of reasons on Court decisions; the publication of arbitrators’ names on the ICC website; diversity in the appointment of arbitrators; tackling delays in the timely submission of awards; and reduction and uplift of arbitrators’ fees.

For those who were not able to attend the sold-out ICC New York conference, the next regional arbitration event is the ICC Miami Conference, 13-15 November 2016 .

This entry was posted in Arbitration, ICC, News Stories. Bookmark the permalink.
Modified on November 13, 2017
Posted on September 22, 2016