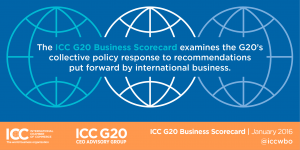 “We published the Scorecard to help the G20 gauge progress and identify areas that merit greater attention. This edition finds that the G20 is making progress on the B20 recommendations that will lead to economic growth and job creation,” said ICC and USCIB Chairman Terry McGraw as he presented the latest edition of the ICC G20 Business Scorecard on January 26 in a keynote speech to the Business-20 (B20) China kick-off event in Beijing. “It is critical that G20 leaders, with support from business, unite to exercise stronger leadership in tackling the world’s economic policy challenges, particularly on trade, investment and the environment.”

The ICC Scorecard is a valuable mechanism for global business to evaluate the G20’s responsiveness to B20 policy recommendations. The fifth edition examines a total of 25 business priorities developed during the 2015 Turkish B20 cycle and rates G20 responsiveness across seven policy areas. This year’s score of 2.0 out of 3.0, translates to an assessment of “Fair.”

“The score is a slight decrease from the Brisbane and St. Petersburg Summits’ scores of 2.1 reflecting our disappointment in G20 leadership on the trade agenda,” said ICC Secretary General John Danilovich.

The Scorecard suggests that passive wording used in the Antalya Communiqué amounted to a missed opportunity to amplify both the urgency of advancing the WTO Trade Facilitation Agreement (TFA) to implementation and the importance of TFA progress to adding $1 trillion to global GDP and 18 million jobs, primarily in emerging markets.

“The G20 should have rallied endorsement for the TFA in the run-up to the WTO ministerial in Nairobi,” said McGraw. “We need 108 countries to ratify the TFA and we still have 10 G20 countries that haven’t. We must get this done.”

Can do better on investment

G20 action on investment and infrastructure yielded a score of only 1.3 out of 3.0. While this demonstrates some progress on the infrastructure investment agenda launched at the 2013 St. Petersburg Summit, the Scorecard notes that G20 leaders have not responded to a growing chorus calling for G20 leadership on international investment governance.

“The country-specific investment strategies endorsed by leaders in Antalya are the type of concrete actions we need to see from the G20,” said Jeffrey Hardy, director of the ICC G20 CEO Advisory Group. “But we also need them to set national targets on infrastructure spending, as a percentage of GDP, and to agree overarching national strategies for credible infrastructure pipelines.”

According to Scorecard ratings the G20 also failed to address B20 calls for leadership on international investment governance, including a B20 recommendation for a model investment framework.

“This was a missed opportunity for the G20 to demonstrate leadership on rationalizing the current patchwork of bilateral and regional investment rules,” said Hardy.

A promising start on SMEs

Reflecting the emphasis on SME growth as a priority during Turkey’s G20 Presidency, G20 commitments to SMEs scored 2.0 out of 3.0 – with high marks for secured for official G20 recognition of the new World SME Forum (WSF), a groundbreaking initiative to unlock the potential of SMEs worldwide. Co-founded by ICC and launched during the Antalya Summit, the WSF will be an enduring legacy of Turkey’s G20 Presidency.

While acknowledging a concrete commitment by G20 leaders to reduce the proportion of young people most at risk of being left permanently behind in the labor market, the Scorecard signals that implementation will require comprehensive reform and modernization of national and vocational education and training systems along with the creation of open and dynamic labor markets.

“It is disappointing that G20 ministers failed again under the Turkish Presidency to address key issues around bringing more people into employment,” said Daniel Funes de Rioja, president of the International Organization of Employers (IOE). “It’s not enough for the G20 employment process to take the line of least resistance; the difficult tasks need to be tackled. Business stands ready to support G20 Governments in this endeavor.”

Much improvement on environment and energy

The Energy and Environment score of 2.2 out of 3.0 is a significant increase over last year’s score of 1.2 and the highest since ICC began monitoring. The increase is the result of a heightened focus on energy and climate change in the Antalya Leader’s Communiqué, coupled with the first G20 Energy Ministers Meeting on October – both indicating that energy and climate issues are gaining greater traction in G20 deliberation at leader level.

“ICC is pleased that the G20 has recognized several of the business priorities outlined in 2015,” said Hardy. “The Antalya Communiqué included unprecedented strong language on climate change, stating and that it was ‘one of the greatest challenges of our time.’ The G20’s Antalya commitments held firm and helped secure the historic global climate agreement reached in Paris in December.”

The Scorecard also reflected good G20 progress on Anti-Corruption, which received a score of 2.3 out of 3.0. The score is acknowledgement of the ongoing partnership between the B20 and the G20 Anti-corruption working Group (ACWG), with several commitments and deliverables in the 2015-2016 G20 Anti-Corruption Action Plan aligned to B20 recommendations. The ACWG is by far the most inclusive of all official G20 working arrangements, with B20 representatives routinely invited to participate in ACWG meetings and to submit suggestions to the ongoing G20 anti-corruption agenda.

“It is encouraging that the G20 continues to demonstrate leadership in denouncing corrupt practices, including the delivery and publication in Antalya of national implementation plans on beneficial ownership transparency,” said Danilovich. “This is an important area of focus for the G20 and presents a significant boon to the global effort to increase transparency and deter corruption. However, one year after Brisbane, there are still gaps between the G20’s own principles and the current state of regulation in several G20 countries.”

This entry was posted in Growth, Jobs and Open Markets, ICC, News Stories. Bookmark the permalink.
Posted on January 27, 2016