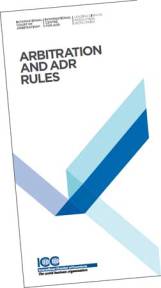 New York, N.Y., September 14, 2011 – The International Chamber of Commerce (ICC) has launched a much-anticipated revised version of its Rules of arbitration, with the aim of better serving the existing and future needs of businesses and governments engaged in international commerce and investment, according to the United States Council for International Business (USCIB), ICC’s American national committee.

The new Rules, which will come into force on January 1, 2012, take into account current requirements and developments in arbitration practice and procedure, as well as developments in information technology, since they were last revised in 1998.  They will be the subject of a two-day conference next week in New York, organized by the ICC International Court of Arbitration and USCIB.

Additions to the Rules include provisions to address disputes involving multiple contracts and parties; updated case management procedures; the appointment of an emergency arbitrator to order urgent measures; and changes to facilitate the handling of disputes arising under investment treaties and free trade agreements.  Other amendments have also been made to ensure that the arbitral process is conducted in an expeditious and cost-effective manner.

In response to growing demand for a more holistic approach to dispute resolution techniques, the new Rules are published in a booklet that also includes the ICC ADR Rules, which provide for mediation and other forms of amicable dispute resolution.  Both sets of Rules define a structured, institutional framework intended to ensure transparency, efficiency and fairness in the dispute resolution process while allowing parties to exercise their choice over many aspects of procedure.

“It is one of the principal aims of the International Court of Arbitration to ensure that its Rules promote efficiency in the arbitral process and that they reflect current practice, consistent with the overriding objective of doing justice between the parties,” said John Beechey, chairman of the ICC International Court of Arbitration.  “To the extent that it was thought necessary to do so, new measures and procedures have been introduced, such that the 2012 Rules of Arbitration respond to today’s business needs while remaining faithful to the ethos, and retaining the essential features, of ICC Arbitration.”

A highly anticipated launch conference, to be held in New York on September 19 and 20, will provide participants with a comprehensive overview of the changes to the Rules and a valuable chance to have direct interaction with several drafting group experts.  Conference information and registration is available at www.iccnorthamerica.org.

“This conference will unveil and explain the changes made to the ICC Rules, and will be the first opportunity for practitioners to acquire a comprehensive overview of the changes made,” according to Josefa Sicard-Mirabal, director of the ICC International Court of Arbitration’s North American office in New York.  “Participants will have the rare opportunity to learn from practitioners who participated actively in the rules revision process in preparation for the entry into force of the new ICC Rules on January 1, 2012.”

An earlier sold-out launch conference took place in Paris on September 12.  Other launch events are scheduled for Hong Kong (October 10), Singapore (October 12), Dubai (October 31), and Miami (November 6).  The Miami event, which will bring arbitration experts, legal practitioners and business executives from throughout Latin America, is also being co-organized by the ICC International Court of Arbitration and USCIB.

The revision process began in 2008 and was undertaken by a small drafting committee of up to 20 members, supported by a wider task force of 202 members and a consultation process with ICC national committees around the world and the ICC Commission on Arbitration.

“A great many dispute resolution specialists and corporate users from different legal traditions, cultures and professions had an opportunity to comment on the drafts, make suggestions and record their views,” said Jason Fry, secretary general of the ICC International Court of Arbitration.  “With this revision of the rules we have tried, in particular, to listen to the users of international arbitration, whether they come from business or government.  Many of the new provisions in the rules have been shaped with their input.”

Peter Wolrich, chairman of the ICC Commission on Arbitration and managing partner with the French law firm Mallet-Prevost, Colt & Mosle, said: “The International Court of Arbitration is at the cutting edge of change, continuously working to promote greater efficiency through the innovative design of new tools and procedures. The new Rules meet the growing complexity of today’s business transactions, the needs surrounding disputes involving states, and the demand for greater speed and cost-efficiency.”

The Rules are available in several languages and are intended for use by parties in any part of the world in proceedings conducted in any language and subject to any rules of law.  To download a free copy of the ICC Rules of Arbitration, please visit www.iccwbo.org/ICCDRSRules.  To register for any of the upcoming launch conferences or training sessions, visit www.iccwbo.org/events.

ICC is not only a trusted provider of arbitration but also of other dispute resolution services. The launch of the new Rules coincides with the launch of the ICC International Center for ADR, previously informally known as the ICC “green services.”  The Center oversees ICC Amicable Dispute Resolution, Expertise, Dispute Boards and DOCDEX (Documentary Instruments Dispute Resolution Expertise), helping to secure settlements efficiently with minimal loss of time and resources.

The International Chamber of Commerce is the largest, most representative business organization in the world. Its hundreds of thousands of member companies in over 120 countries have interests spanning every sector of private enterprise.  A world network of national committees keeps the ICC International Secretariat in Paris informed about national and regional business priorities. More than 2,000 experts drawn from ICC’s member companies feed their knowledge and experience into crafting the ICC stance on specific business issues.  The United Nations, the World Trade Organization, the G20 and many other intergovernmental bodies, both international and regional, are kept in touch with the views of international business through ICC.  For more information please visit www.iccwbo.org.