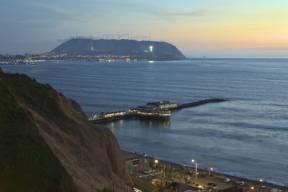 The informal economy – unregulated, untaxed and often dangerous – is a barrier to development and economic growth. At this year’s 18th International Labor Organization Americas Regional Meeting in Lima, Peru (October 13 to 16), nearly 500 governments, worker and employer delegates agreed to the Lima Declaration, a series of measures to promote the fight against informality and inequality in the region.

They agreed on a package of labor and economic that promote social inclusion, decent work and productive employment as well as an enabling environment for sustainable enterprises.

In particular, the Lima Declaration urges governments to adopt the following ILO-supported policies over the next four years and beyond:

Governments should focus their efforts on structural reforms that lead to enhanced and sustained growth and productivity, that is: reforms to reduce the labor productivity gap that exists between the majority of Latin American countries and developed economies. The Employers Group also asked governments to undertake reforms that diversify production structures into sustainable and intensive knowledge- and technology-based activities that generate added value and quality jobs. Investments in infrastructure are also crucial for economic growth.

In the closing ceremony Juan Mailhos, employer delegate from Uruguay and a member of the ILO Governing Body, highlighted the group’s commitment to an ILO that has adapted to the challenges of the 21st century.

Adopted in 1961, the European Social Charter is an EU treaty that guarantees social and economic human rights, such as the rights to fair remuneration and safe working conditions.

Since 1990 many new member States have joined the Council of Europe. They have different economic and social challenges than the founding members. The interpretation of the European Social Charter by its Supervisory bodies has to be more responsive to their specific situation.

Hornung-Draus said: “The Social Charter will achieve its goal of promoting economic and social development only if its principles are implemented in a way that respect the variety of situations of Member States, and if they are conducive to the structural reforms and fiscal consolidation required by the changing economic and social context.”

Globalization, technological changes require open, dynamic and flexible labor markets and a commitment to life-long learning. In some European countries, where labor market regulation has not adapted to this changing context, very high unemployment, and especially youth unemployment, can only be properly addressed with profound structural labor market reforms.

In addition, social spending in some countries European countries has reached levels that overwhelm economic resources, leading to high public debt. Public debt crowds out investment, because social security systems in those countries become unsustainable in light of changing demographics. Fiscal consolidation in these countries is urgently required, not only to restore the credibility of financial markets and attract investment, but also as an act of social justice towards the young generation.

This entry was posted in Business In Society and tagged Corporate Responsibility and Labor Affairs.
Posted on October 23, 2014