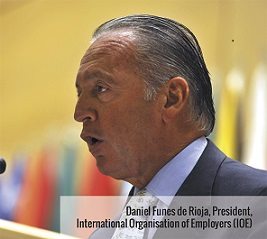 Addressing a B20 Roundtable in Melbourne, Australia on September 9, Daniel Funes de Rioja, president of the International Organization of Employers, called for key actions governments can take to bring about the right conditions for job creation. As a participant in the B20 Human Capital Taskforce, he underscored two areas he particularly wanted to see addressed: structural reform to enhance labor market flexibility and better alignment between prospective employees’ education and the needs of business.

Funes de Rioja also reminded the audience of the part played by the business community in youth workforce development with the launch of the Global Apprenticeships Network (GAN), a coalition of companies that offers apprenticeships to young workers and shares youth employment best practices with other companies and labor administrations.

“Government reforms in both areas are needed in order to open up opportunities for newcomers to enter the labor market, to allow companies to adapt in line with demand, and restore their confidence to hire,” he said. “To date, we have seen progress in terms of implementation of measures to align skills training with labor market needs.” But he added, “focusing on the supply side alone will not bring about a labor market that meets the needs of employers and workers in the 21st century.”

In June 2013, the B20 and L20 reached consensus on the need for a global apprenticeships network to combat long-term youth unemployment. “Global business, through the Business and Industry Advisory Committee to the OECD and the IOE, has since moved forward with launch of the GAN,” said Ariel Meyerstein, USCIB’s vice president for labor affairs, corporate responsibility and corporate governance. “It’s time for countries to meet business half-way to further incentivize and support apprenticeship programs throughout the G20.”

Funes de Rioja concluded by reiterating the position of the B20 Human Capital Taskforce: “Businesses face structural challenges to increasing employment. Dismantling the regulatory barriers that restrict diverse forms of employment is in the interest of businesses and job seekers alike and we hope the G20 governments will not waver from their commitment in this regard.”

This entry was posted in Business In Society, Latest from USCIB and tagged Corporate Responsibility and Labor Affairs.
Modified on May 8, 2017
Posted on September 9, 2014