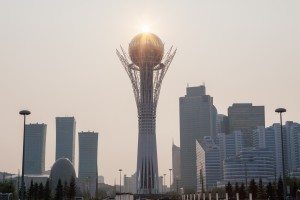 New York, N.Y., March 21, 2017 – Kazakhstan is set to become the 77th member country to accept ATA Carnets for the temporary, duty-free importation of various types of goods, beginning April 1, according to the United States Council for International Business (USCIB), which administers the ATA system in the United States.

Known as “merchandise passports,” ATA Carnets are international customs documents that allow for the temporary importation of various types of goods, duty-free and tax-free, for up to one year. In most ATA member countries and territories, including Kazakhstan after April 1, Carnets cover import of professional equipment, commercial samples and items for display at exhibitions and fairs. The worldwide ATA Carnet system is overseen by the World Customs Organization and the International Chamber of Commerce (ICC), for which USCIB serves as the American national committee.

“The implementation of the ATA system demonstrates Kazakhstan’s commitment to promoting economic growth and trade facilitation,” stated USCIB President and CEO Peter M. Robinson. “Use of Carnets will make it easier for American and other foreign companies to do business with the country, while enabling Kazakhstan businesses easier access to the U.S. and global markets.”

The Republic of Kazakhstan is the ninth largest country in the world by area and is the world´s largest landlocked nation. ATA membership by the country – long regarded as a priority for other countries in the system – will significantly facilitate trade relations between Kazakhstan businesses and their foreign partners. The Chamber of International Commerce of Kazakhstan has been designated as the official guaranteeing organization for ATA Carnets in the country.

Prior to Kazakhstan, Brazil and Indonesia were the two most recent countries to join the global ATA Carnet system. More than 180,000 Carnets are issued every year worldwide, for goods with a total value of over US$21 billion. The United States is the third-largest user of ATA Carnets, following Germany and Switzerland. The Republic of Georgia is expected to join the ATA system in the near future.

Find out more about the services offered by USCIB to facilitate cross-border trade and investment at www.uscib.org.

USCIB promotes open markets, competitiveness and innovation, sustainable development and corporate responsibility, supported by international engagement and regulatory coherence. Its members include U.S.-based global companies and professional services firms from every sector of our economy, with operations in every region of the world. With a unique global network encompassing leading international business organizations, including ICC, USCIB provides business views to policy makers and regulatory authorities worldwide, and works to facilitate international trade and investment.