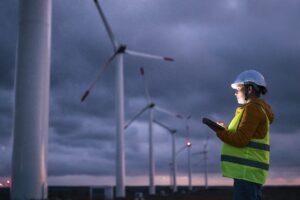 Other speakers on the panel included the Deputy Director of the Environment Directorate at OECD Ingrid Barnsley; Director of International Climate Initiatives at the World Resources Institute David Waskow, and Lead Climate Lawyer at the U.S. State Department Andrew Neustaetter.

Kennedy remarked that COP26 was noteworthy, “not just because of the turnout and the accomplishments, but also because we have never seen that kind of engagement from U.S. business – and indeed – from business at large.” Kennedy also pointed out that hundreds of CEOs attended, as well as thousands of business representatives from all over the world. With numerous and substantial voluntary pledges made by the private sector, COP26 demonstrated the unprecedented willingness of business to act on climate change.

USCIB is already starting to plan its engagement in COP27 in November in Egypt to build on these commitments and to ensure such business actions are taken into account in the Paris Agreement global stock-take, which will provide the basis for additional commitments by governments.

Yet business received only scant mention in COP26 concluding documents. “While the outcome documents from Glasgow refer multiple times to a range of constituencies, business was barely mentioned, aside from Article 6 on carbon pricing,” said Kennedy.

In closing, Kennedy emphasized that USCIB members support meaningful inclusion and mainstreaming of business as necessary to scale up action to keep 1.5 alive, ramp up further deployment of private sector innovation and investment and bring private sector solutions and employment, including in connection with adaptation and resilience.

To watch a recording of the panel, please visit this website.