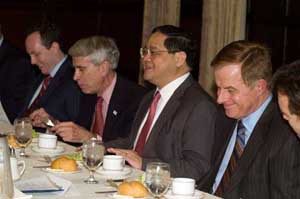 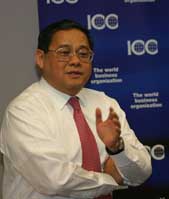 Thanks and congratulations to Edward Regan, former chair of USCIB’s Information Policy Committee, who retired recently from J.P. Morgan Chase & Company following a 35-year career with the company. “Our organization is stronger for your support and leadership, and so are those of us who have had the personal privilege and pleasure of working with you over the years,” USCIB President Peter M. Robinson wrote Mr. Regan..… Ronnie Goldberg, Executive Vice President for Policy, has taken on a key role with the Business and Industry Advisory Committee (BIAC) to the OECD.  In August she was elected vice chair of the BIAC Employment, Labor and Social Affairs Committee.  BIAC Secretary General Tadahiro Asami wrote Ms. Goldberg that “we are pleased to be able to count on your experience and leadership in guiding this essential policy group.”

New USCIB Members – We warmly welcome the Financial Services Roundtable to USCIB.  To learn how USCIB membership can benefit your company, contact Alison Hoiem at 202-682-1291 or ahoiem@uscib.org.

The ICC International Court of Arbitration has hired two new Deputy Directors for Arbitration and ADR, Suzanne Ulicny and Victoria Shannon, working out of USCIB’s New York headquarters.  Ms. Ulicny holds a law degree from Loyola University Chicago School of Law, and she most recently served as a corporate associate at Dewey & LeBoeuf LLP.  Ms. Shannon holds a J.D. from Harvard Law School, and previously worked as an associate with the San Francisco office of Pillsbury Winthrop Shaw Pittman, LLP.  Both succeed Nancy Thevenin.

This entry was posted in Communication Department, Member Staff News. Bookmark the permalink.
Modified on February 10, 2015
Posted on August 1, 2008