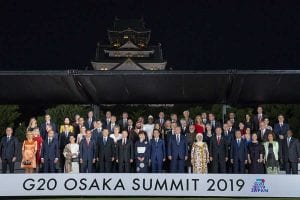 USCIB responded with cautious optimism to the modest progress made at this year’s Group of 20 Summit in Osaka, Japan, and at the meeting between President Trump and Chinese President Xi Jinping, where the two leaders agreed to continue working toward a resolution of their bilateral trade disputes.

“We are relieved that the U.S. and China have stepped back from a broader escalation of their tit-for-tat tariffs,” said USCIB Senior Vice President Rob Mulligan. “We encourage both parties to move swiftly toward resolution of their disputes. The existing tariffs have already had a negative impact on American exports, and could threaten U.S. jobs as well as our broader competitiveness.”

Mulligan also welcomed the G20 leaders’ endorsement of recent OECD blueprints for cooperation on global tax measures as well as on a “human-centric” approach to the deployment of artificial intelligence – both areas where USCIB members have provided active input to international policy deliberations.

In their communiqué, the G20 leaders warned of growing risks to the global economy but stopped short of denouncing protectionism, mainly due to push-back from the United States. “We strive to realize a free, fair, nondiscriminatory, transparent, predictable and stable trade and investment environment, and to keep our markets open,” they stated.

While leaders made only passing mention of efforts to modernize the World Trade Organization, several voiced renewed support for the recently launched plurilateral negotiations on e-commerce taking place under the WTO’s aegis.

President Trump and leaders from China, Japan and the European Union joined the WTO Director General Roberto Azevêdo in welcoming the Osaka Declaration on the Digital Economy, which commits the signatories to promote efforts on international rule-making in this area and urges further progress on e-commerce at the WTO.

“A fragmentation of the digital economy would hurt us all,” said Azevêdo. “It would mean higher costs and higher barriers to entry, affecting developing countries and smaller businesses the most. The 20th century showed that a fractured global trade order was not sustainable – that’s why we created the WTO. The same is true today. You may well be working on a constitution for the economy of the 21st century.