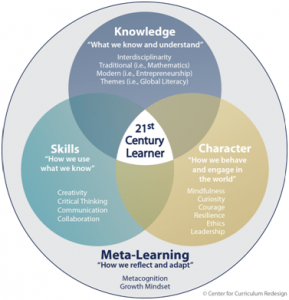 What kinds of competencies will be needed in a world where advanced technologies, including robotics and artificial intelligence, play an increasingly integral role in our workplaces and societies? A new book co-authored by Charles Fadel, founder of the Center for Curriculum Redesign, titled Four-Dimensional Education grapples with the challenges faced by today’s educators in preparing learners for the 21st-century economy.

In 2014, anticipating the present concerns, Fadel led a symposium on the impact of robotics and artificial intelligence in the workplace, organized by the USCIB Foundation in partnership with the McGraw Hill Financial Global Institute. Furthering the work of the Foundation on education, training and human capital requirements in the 21st century, the symposium gathered experts in technology, education and employment to explore how robotics and AI could impact the future jobs market. Fadel is the chair of the Education team of the Business and Industry Advisory Committee (BIAC) to the OECD education committee, and was formerly Global Education Lead at Cisco Systems.

The book explains that the education systems of the United States and many other advanced countries were designed with the needs of the 19th –and 20th century, with a largely industrial workforce, in mind. These systems are no longer adequate for addressing the needs of our modern, hyper-connected and digital economy. The book argues that in order to equip learners with the competencies they need for a more technologically advanced workplace, older curricula will need to evolve to new systems that foster Skills (such as creativity, critical thinking, communication and collaboration), and Character qualities (such as ethics, leadership, mindfulness, curiosity, courage and resilience) all of which will be needed to adapt in a faster-changing jobs market.

“Four Dimensional Education brings a deeply cogent, synthetic, open-minded conversation to explore one of the key challenges to our society – how to transform our education systems to respond effectively to global 21st century needs and aspirations,” said USCIB President and CEO Peter Robinson. “USCIB has been privileged to be part of this conversation through a series of sponsored roundtables with the CCR bringing educators together with economists and business to bring new insights and perspectives to help students build the world we want.”

In an interview with USCIB, Fadel explained that educators will be stymied in their progress unless they revisit educational standards and assessments, including for those areas of knowledge that are more relevant today. For example, in the late 1800s educators began teaching trigonometry because the economy demanded more wood workers and land surveyors. Today, there is demand for “big data” – statistics and probability, and algorithmics. Fadel stressed the need for teaching branches of mathematics that are underrepresented in current curricula, such as Game theory, and algorithmics.

Additionally, he said new disciplines are needed, such as robotics and coding: “We talk about STEM – science, technology, engineering and math – but we only teach the ‘S’ and the ‘M,’ parts. What about Technology and Engineering?  And beyond STEM, what about entrepreneurship, wellness, etc? It is not about STEM or Humanities/Arts, it is STEM and Humanities/Arts. All these disciplines matter.”

The “social pain” of innovation 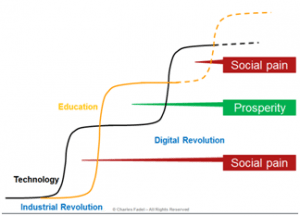 Fadel then noted that over time technology zooms ahead of education, which leads to instances of social pain, usually followed by an educational response. After the industrial revolution, policymakers responded with mass schooling, which helped a large number of mostly illiterate people, farmers and artisans become factory-ready. Once our educational systems caught up with advances in technology, prosperity ensued.

“Well, the digital revolution is doing the same now at an accelerated rate, where you have a lot of jobs that can be off-shored or automated due to technology,” Fadel said. “So we have to catch up and adapt, even faster than we did for the industrial revolution.”

When asked what the education system of the future should look like, Fadel remarked that students will still need a broad knowledge base that they can tap throughout their life as they move from one specialization to another: “When you’re a young kid, you’re going to learn how to read, write and compute – there’s no deviation. But when you’re an adult, you choose your pathway to stay current. So what we’re trying to cultivate is what IBM has been calling a ‘T-shaped individual,’ where you’re broad through your education and deep through your specialization, and if you expand that it’s an M-shaped model where you add specializations as you go through your career, drawing from that breadth that you’ve acquired in your younger years, and staying current.”

Many societal actors have a role to play in fostering new 21st-century education systems, including governments, parents and corporations. Fadel argued that governments should broaden how they measure and assess students’ capabilities similar to how corporations judge potential job applicants or existing employees, whereby employers examine not just knowledge but also character and skills. He then noted that parents have a role to play by advocating for changing what gets taught in schools, rather than applying pressure on overburdened teachers. And finally, corporations can help by being clearer about exactly what kinds of knowledge, skills, and character qualities they value in future employees.

“I’d love to see corporations be more systematic about their requests for change both in clarity of needs, and stamina,” Fadel concluded. “They seem to come in and out; they get distracted by their own strategic imperatives. It’s hard for corporations to have a steady hand year after year because they have their own dynamics, yet that’s what’s required – a steady hand and a steady set of requirements that’s adaptive to a rapidly changing world.”

This entry was posted in BIAC, Business In Society, News Stories. Bookmark the permalink.
Modified on January 28, 2016
Posted on January 27, 2016