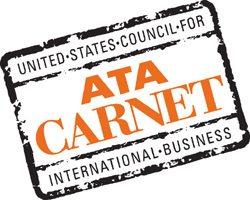 New York, N.Y., February 8, 2008 – The service that issues and guarantees ATA Carnets – the “merchandise passports” that enable users to get product samples, professional equipment and other temporary exports through customs duty- and tax-free – has unveiled its new logo.

ATA Carnet is a trade service of the United States Council for International Business (USCIB), a private industry body that administers the Carnet system in the United States under charter from the U.S. government.  The new logo, part of an organization-wide re-branding campaign, is designed to clearly reflect the Carnet’s essential role as a passport for trade.

“ATA Carnets are, first and foremost, a practical business tool,” said Cynthia Duncan, USCIB’s senior vice president for Carnet operations.  “They save users time, money and the hassle of getting held up at customs.  We believe our ‘new look’ conveys the practical, no-nonsense approach our users take to global trade.”

Carnets are internationally recognized customs documents for temporary duty-free, tax-free import of commercial samples, professional equipment and goods displayed at trade shows.  Companies around the world use them to reduce costs and speed global operations.  (The acronym “ATA” is a combination of the French and English abbreviations for “temporary admission.”)

ATA Carnets are accepted in over 75 customs territories and can be used for multiple trips during a one-year period.  The global Carnet system , which is overseen by the Paris-based International Chamber of Commerce (ICC), is administered in the United States by USCIB, which issues Carnets out of its New York headquarters and through its two service providers, Roanoke Trade Services and the Corporation for International Business.

Over 155,000 carnets were issued worldwide in 2007, covering goods valued at almost $12 billion.  The worldwide Carnet network is growing, with Pakistan and Chile among the most recent additions to the system and Ukraine slated to join next month.  A country joins the Carnet system by ratifying either the Istanbul Convention or the ATA Convention on temporary imports, and by designating a private-sector body to issue and guarantee Carnets within its territory.

USCIB promotes an open system of world commerce.  As American affiliate of the leading international business and employers organizations, including ICC, it provides business views to policy makers and regulatory authorities worldwide.  USCIB facilitates international trade by issuing and guaranteeing ATA Carnets, by promoting international cooperation in such areas as customs policies and commercial dispute resolution, and through its ICC Books USA unit, which publishes a variety of publications on international trade and investment.

This entry was posted in ATA Carnet, Communication Department, Press Release. Bookmark the permalink.
Modified on December 28, 2015
Posted on February 8, 2008