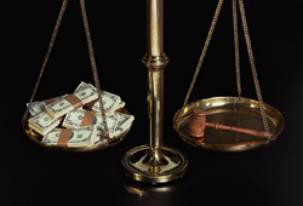 Today, the Organization for Economic Cooperation and Development launched its Foreign Bribery Report in Paris. The report presents an analysis of foreign bribery cases that have been concluded since 1999, and it is intended to help combat transnational corruption.

Shaun Donnelly, vice president of investment and financial services at USCIB, as well as Kimberley Claman, senior vice president of international government affairs at Citi, represented USCIB at this event. They were joined by Hanni Rosenbaum, senior policy director at BIAC, who leads their anti-bribery effort.

The various speakers all noted the groundbreaking importance of the report, however also emphasized that understanding the problem is only part of the solution. Addressing this point, the report concludes with Next Steps, including a list of ideas for future work, such as annual updates, a public database, further study of SOEs, or additional study of the demand side of bribery, a point Secretary General Gurria also noted in his comments.

This OECD report presents an important step forward in the OECD’s anti-bribery work surrounding the Convention.

This entry was posted in Growth, Jobs and Open Markets, News Stories and tagged Trade and Investment.
Modified on January 13, 2015
Posted on December 2, 2014