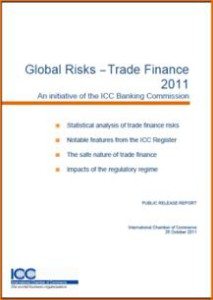 Beijing and New York, N.Y., October 26, 2011 –The rules set by bank regulators impose unwarranted capital requirements that choke trade and have adverse impacts on growth. A new report issued today by the International Chamber of Commerce (ICC) shows that trade finance is a relatively low-risk asset class that should not be feared by banks, nor over regulated by governments, according to ICC’s American national committee, the United States Council for International Business (USCIB).

ICC also said it was pleased that the Basel Committee on Banking Supervision had announced measures yesterday that recognize trade finance as a low-risk activity for banks, and said that there is opportunity to further refine the rules to foster the development of trade and the support of SME clients. ICC asserted that treating trade finance as a unique asset class to accurately reflect its low risk will help foster more trade and create jobs.

“The ICC report provides a compelling case for the Basel Committee to reduce the proposed capital requirements, which by some estimates effectively increase the cost of trade finance by 30 to 40 percent ,for importers and exporters around the world,” said Michael Quinn, managing director with JP Morgan and chair of the USCIB’s Banking Committee.  “As the rules have yet to be finalized, this ICC effort will hopefully address major concerns in the Basel Committee’s original recommendations.”

The new ICC report calls on standard setters and policy makers to carefully study the potential unforeseen impact of proposed Basel III changes on trade finance from the Basel committee and to make trade finance more accessible and affordable.

Reliable and cost-effective finance and guarantees to companies looking to import or export commodities, consumer goods, and capital equipment are critical to keep trade flowing within and between counties. World trade is, in turn, key to global economic growth.

The outlook on the risks of defaults in trade and finance were revealed in the ICC report Global Risks – Trade and Finance, issued on the occasion of a major ICC Banking Commission meeting taking place in Beijing from October 24 to 28.

The report was based on analysis of the ICC Trade Finance Register, the most comprehensive dataset available on the market. It contains data from major international banks reflecting a minimum of 60-65% of traditional global trade finance activity, worth about USD2-2.5 trillion. Fewer than 3,000 defaults were observed in the full data set of 11.4 million transactions.

In the midst of the current global economic crisis, the ICC Banking Commission meeting brings together some 350 eminent banking professionals, international organizations and supervisory bodies from over 50 countries to examine the key trade and finance challenges faced by the industry.

The trade and finance experts at the ICC meeting also worked to frame business input to the G20 on stimulating jobs and growth, ahead of the upcoming G20 Summit in Cannes. The discussions were part of a series of regional consultations led by the ICC G20 Advisory Group around the world. Since its creation in May 2011, the G20 Advisory Group has been leading ICC’s efforts to develop policy input to the G20 process in areas including: trade and investment, financial regulation, anti-corruption, the international monetary system, commodity price volatility and green growth.

“Trade will play a key role in tackling the jobs crisis,” said Jean-Guy Carrier, ICC’s secretary general. “Economic growth depends largely on the capacity of G20 governments to improve the conditions for international trade, including easing trade finance rules. However, what we’re seeing is that protectionist measures are growing within the G20. This trend must be reversed and more needs to be done to dispel the myths that trade results in job losses. Trade is a dynamic process that contributes to job creation.”

Global Risks – Trade Finance 2011 is a useful tool for both policy-makers and senior executives in financial institutions around the world. It will enable institutions to better understand the level of risks involved in different trade finance products and allow bankers to benchmark their activities in a more rigorous fashion.

“I hope that by focusing on the critical connections between default levels in trade finance and the shaping of new regulatory recommendations, decision-makers will be able to engage collectively in efforts to improve the global financial system’s overall resilience,” said Kah Chye Tan, global head of trade and working capital, Barclays Corporate, and chair of the ICC Banking Commission.

To read the ICC response to the Basel Committee on Banking Supervision announcement on trade finance, please visit www.iccwbo.org.

About the International Chamber of Commerce

ICC is the world business organization, representing enterprises from all sectors in every part of the world. It promotes cross-border trade and investment and the multilateral trading system, and helps business meet the challenges and opportunities of globalization. Business leaders and experts drawn from ICC’s global membership establish the business stance on broad issues of trade and investment policy as well as on vital technical subjects. ICC enjoys a close working relationship with the United Nations and other intergovernmental organizations, including the World Trade Organization and the G20. ICC was founded in 1919. Today it groups hundreds of thousands of member companies and associations from 120 countries. For more information please visit www.iccwbo.org.

This entry was posted in Growth, Jobs and Open Markets, ICC, Press Release and tagged Banking.
Posted on October 26, 2011