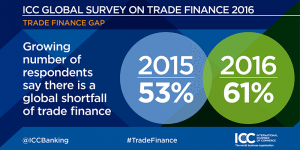 Business executives have identified a sharp decrease in the availability of financing for cross-border trade, according to the latest annual survey of global trade finance from the International Chamber of Commerce. According to the survey — which received 357 responses from 109 countries worldwide — 61 percent of respondents reported a global shortage of trade finance . Only 52 percent of respondents reported an increase in trade finance activity, compared to 63 percent in 2015 and 80 percent in 2012. Furthermore, the perceived shortfall came predominantly from regional and global banks — 78 percent and 56 percent respectively, compared to 41 percent of national banks.

ICC Secretary General John Danilovich said: “We must emphasize the importance of trade finance. It is often forgotten – trade finance has dropped off the international agenda. We need to do more to communicate its central importance to the global economy.”