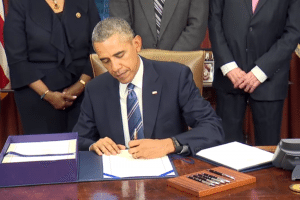 President Obama signed the Trade Facilitation and Trade Enforcement Act, commonly referred to as Customs Reauthorization, into law on February 25, just two weeks after the Senate approved the bill. This bipartisan bill is the first true Customs modernization legislation in nearly two decades.

The legislation will strengthen trade enforcement at U.S. ports and borders, and update the organization and management of the U.S. Customs and Border Protection. The bill includes provisions that streamline and facilitate trade, reduce business costs and paperwork burdens, and provide an enforcement mechanism for trade agreements.

“It is timely then for us to be signing this bipartisan customs bill because it’s an important milestone in our trade agenda,” said President Obama at the signing ceremony. “This is an example of smart trade policy in the 21st century.”

“We welcome the signing of the Customs bill and thank the Administration and Congress for their hard work on this key bipartisan legislation that meets the needs of business,” said Megan Giblin, USCIB’s director for customs and trade facilitation. “Our focus on this bill’s provisions will now turn to implementation, and we look forward to working with the administration to ensure its success.”

This entry was posted in Competitiveness and Innovation, News Stories and tagged Customs and Trade Facilitation.
Posted on February 25, 2016