The OECD recently published its final official development assistance (ODA) figures for 2014. According to the findings, in 2014, final figures for net ODA flows from OECD Development Assistance Committee (DAC) member countries totaled $137.2 billion, marking an increase of 1.2 percent in real terms over 2013 and surpassing the all-time high in 2013.

In the past 15 years, net ODA has been rising steadily and has increased by nearly 70 percent since 2000. The largest DAC donor countries by volume were the United States, the United Kingdom, Germany, France and Japan.  Denmark, Luxembourg, Norway, Sweden and the United Kingdom continued to exceed the United Nations’ ODA target of 0.7 percent of gross national income. 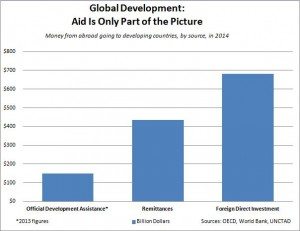 Although net ODA has been increasing over time, estimates by the United Nations show that the needs for financing the Sustainable Development Goals (SDGs) will $4 trillion. USCIB has noted that ODA cannot do the job of development finance by itself. In order to move from the “billions to trillions” in development finance, policymakers will need to catalyze more private investment, especially in least developed countries.

More information about the evolving role of ODA and the rise of blended finance is available at USCIB’s Business for 2030 web portal about private sector engagement with the UN SDGs.

This entry was posted in BIAC, News Stories, Sustainable Development. Bookmark the permalink.
Modified on April 25, 2017
Posted on January 11, 2016