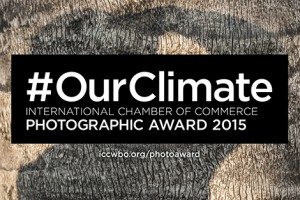 The award invites professional and amateur photographers from all over the world to submit applications reflecting on the theme of #OurClimate: from the causes and impacts of a changing climate, to our response (past, present or future), to the single biggest challenge facing humanity.

“The winning photographs will be exhibited alongside a selection of shortlisted images that most powerfully illustrate the theme of #OurClimate,” said ICC Secretary General John Danilovich. “The exhibition will be held in December 2015 during the Paris Climate Conference at ICC Global Headquarters in Paris.”

The winners will be chosen by a high-level judging panel—including ICC and USCIB Chairman Terry McGraw, Christiana Figures of the United Nations Framework Convention on Climate Change and Arancha Gonzalez of the International Trade Center—and will be announced at ICC’s COP21 gala reception on December 8.

The Award is open to all photographers—whether amateur, professional or student—who are invited to submit between 1 to 3 thought-provoking and captivating images exploring the theme of #OurClimate.

To learn more about the award and terms of entry, visit: iccwbo.org/photoaward