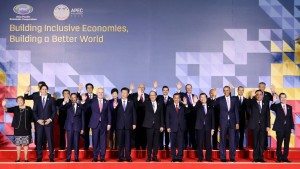 Thousands of delegates from around the Pacific Rim gathered in the Philippines this month for the Asia-Pacific Economic Cooperation CEO Summit, the most influential and high-level economic dialogue in the region. The summit brings together heads of state, business leaders and economic experts to share their views on how to promote free trade, innovation, growth and integration in the Asia-Pacific.

APEC leaders released two statements following the conclusion of the CEO summit: the 23rd APEC Economic Leaders’ Declaration titled “Building Inclusive Economies, Building a Better World: A Vision for an Asia-Pacific Community” and a statement supporting the multilateral trading system on the occasion of the World Trade Organization’s 20th anniversary.

Throughout the year, USCIB participated in several APEC workstreams, including efforts on chemicals, advertising and global value chains. USCIB also noted the November 19 APEC leaders’ announcement of an initiative aimed at boosting services trade among all 21 APEC economies. Leaders also reaffirmed their objective of completing the Free Trade Area of the Asia-Pacific (FTAAP).

We are pleased to see the following items USCIB worked on were highlighted in the Ministerial statement:

The APEC Leaders’ Declaration called for the development of policies that take full advantage of global value chains (GVCs) and encourage greater participation, competition, entrepreneurship and innovation through effective and comprehensive measures, including balanced intellectual property systems and capacity-building.

In August at the third APEC Senior Officials Meeting (SOMIII), USCIB participated in a half-day trade policy dialogue titled, “APEC Best Practices to Create Jobs and Increase Competitiveness,” which convened private-sector representatives and officials from the United States and the OECD for a discussion of the impacts of forced localization policies and how best trade practices can serve as sound alternatives to these policies. APEC ministers welcomed the results of the trade policy dialogue and instructed officials to continue to identify alternatives to localization policies and develop best practices as a means to foster job creation and increase competitiveness.

The declaration also noted progress in the APEC Strategic Blueprint for Promoting Global Value Chain Development and Cooperation as a promising avenue for growth, competitiveness and job creation in the region.

At SOMIII in August, Helen Medina, USCIB’s vice president for product policy and innovation, represented member views at several meetings of the Chemical Dialogue. USCIB also brought to the table two new ideas at the Chemical Dialogue to help bolster regulatory cooperation and streamline customs procedures in the APEC region: 1) a self-certification customs form, in which an importer of goods would self-certify that their imports comply with the U.S. Toxic Substances and Control Act, and 2) a regional capacity-building project related to the theme of  “Analogue/Read-across use in Risk Assessment.”

APEC and the Future of Asia-Pacific Trade and Economic Growth

USCIB is an outreach partner for a December 14 event hosted by the Asia Society Policy Institute in New York about the future of the Asia-Pacific region’s economic growth. Registration and the event program are available on the Asia Society’s website.

This entry was posted in Growth, Jobs and Open Markets, News Stories and tagged APEC.
Posted on November 20, 2015