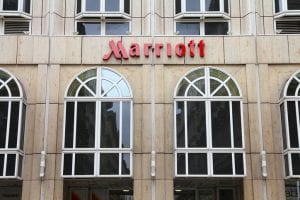 Marriott International’s Chief Compliance Officer William Dempster accepted the award for Marriott and delivered brief remarks.  Marriott was singled out for its efforts to foster a culture of accountability and anti-corruption compliance.  The Ethisphere Institute has recognized the company for 11 years as one of the “World’s Most Ethical Companies.”

For the fifth time in the eight years the Coalition has been presenting its Corporate Leadership award, a USCIB member company was honored. Marriott joins a distinguished list of other USCIB member companies including General Electric, Coco-Cola,  PepsiCo, and Bechtel which have also received the coveted award.

USCIB Vice President Shaun Donnelly, a member of the Coalition for Integrity’s Policy Advisory Board, and USCIB Senior Director for Trade, Investment and Financial Services Eva Hampl represented USCIB at the awards dinner.  Donnelly and Hampl lead USCIB’s anti-bribery and anti-corruption policy work, including with the U.S. Government and with the Organization for Economic Cooperation and Development (OECD)  in Paris and other international partners.

“USCIB is delighted to one of our leading member companies win the Coalition’s Corporate Leadership Award again this year,” commented Donnelly.  Marriott is a great example of principled, proactive leadership in combating bribery and corruption.  We are proud of the work Marriott and other member companies are doing every day in this important policy area.”