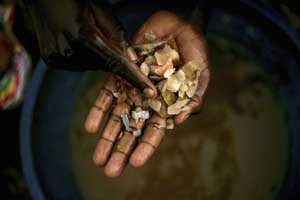 Earlier this month, the Securities and Exchange Commission adopted final rules to implement Section 1502 of the Dodd-Frank law requiring companies to publicly disclose whether they source four metals – tin, tantalum, tungsten and gold – from the Democratic Republic of Congo (DRC) or an adjoining country, and whether doing so benefited armed groups in the DRC.

The eastern portion of the DRC has been affected by civil and military conflict for decades, leading to numerous UN and other international efforts to stem the violence.  Section 1502 was included in Dodd-Frank to respond to concerns that armed groups in the DRC are using mining and minerals trade to help finance the conflict.

“While the SEC rules included some limited changes sought by business, they still contain many overly prescriptive and burdensome provisions, and are likely to ensure the continued de-facto embargo of minerals from the DRC as companies seek to avoid having to report under the rules,” said Adam Greene, USCIB’s vice president of labor affairs and corporate responsibility.

Additionally, Greene noted that the SEC failed to conduct an adequate cost-benefit analysis of the new rules:  even though the SEC increased their cost estimate from $71 million to $3-4 billion, the new figure still falls well below other estimates that range from $8 to16 billion, and no effort was made to quantify the benefits of the new rule.  As a result, it is nearly certain that one or more U.S. business groups will sue the SEC to block the adoption of the Final Rules.

Independent from the SEC rulemaking process, the OECD has developed due diligence guidance for sourcing minerals from areas of conflict  minerals and is currently coordinating a multi-stakeholder process to help companies and trade associations implement the guidance.  The SEC rules explicitly recognize the importance of OECD guidance as the only meaningful international benchmark to which corporate due diligence measures must conform.

Given the important role of the OECD guidance in these or any SEC rules, USCIB has participated directly in the OECD’s work, in order to ensure that the guidance is practical, reasonable and risk-based.  USCIB will continue to play this role going forward and has taken on a leadership role in the governance of the process, which will help us to ensure that it remains effective and well balanced.

This entry was posted in Business In Society, Latest from USCIB and tagged Corporate Responsibility and Labor Affairs.
Posted on August 30, 2012