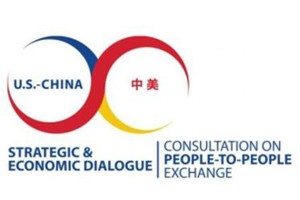 Last week, the United States and China concluded their seventh meeting of the Strategic & Economic Dialogue (S&ED) in Washington, D.C.  The annual high level dialogue, which launched in 2009 to provide a forum to discuss a wide range of bilateral, regional, and global issues between the two countries, has become an integral part of the economic relationship. The meeting resulted in a number of joint strategic and economic outcomes issued by the Departments of State and Treasury which co-lead the U.S side.  The Treasury also published a U.S.-specific fact sheet on the outcomes of the economic track.

At the dialogue, both nations reaffirmed their commitment to negotiate a high-standard Bilateral Investment Treaty (BIT) and intensify negotiations.  Even before the meetings began, the BIT was considered one of the top issues on this year’s agenda.  The 19th round of BIT negotiations concluded earlier this month in Beijing, following a period of a year and a half, during which China developed its “negative list,” a compilation of areas it would like exempted from the BIT’s market-opening rules.  Despite the apparently slow process of the negotiations, China presented its list, the first the country has ever created, at the June round in Beijing, demonstrating its commitment to the negotiations.  The U.S. experts, led by USTR and State, are now reviewing the initial Chinese list in great detail.

A major outcome of last week’s S&ED, described as one of the dialogue’s most significant outcomes by U.S. Treasury Secretary Jack Lew, was China’s commitment to provide an updated negative list reflecting a commitment to open investment environments by September of this year.  This could be a key step in the negotiation process, moving discussions forward in a manner that will allow for an appropriately market opening agreement to benefit both negotiating parties.  The Treasury Department’s fact sheet explains that U.S. officials have made clear to China that their list of exceptions will have to be ‘very limited and narrow’, as well as ‘represent substantial liberalization’.

Adequate investment protection is indispensible for U.S. investors in China, as anywhere in the world.  While a successful BIT presents an opportunity for U.S. investors to gain access to new sectors in the Chinese market, without protections and narrowly tailored exclusions, the benefits remain limited.  USCIB’s Shaun Donnelly, Vice President of Investment and Financial Services, discussed the S&ED on a segment on CNBC last week, highlighting the importance of the investment talks.

Despite being the world’s two largest economies, and the destinations for about 30 percent of global foreign direct investment (FDI), the United States and China account for a relatively small share of one another’s FDI.  In 2014, Chinese FDI in the United States exceeded American FDI in China for the first time.  Given the size and dynamic nature of the Sino-American economic relationship, the importance of finishing these the BIT negotiations with a high-standard outcome cannot be overstated; a sub-standard agreement would do more harm than good.  Progress from the most recent round of negotiations and the outcomes of the S&ED provide much needed momentum to the process and hopefully, the United States and China can capitalize on this momentum, leading to a swift conclusion of a strong agreement.

Of course, other developments – be they positive or negative – continue to be relevant to American or other foreign investors looking at China, which remains a complex and challenging place to do business.  Even as we see signs of progress on the BIT, other developments send discouraging signals – from sectoral restrictions to a new NGO law that threatens to restrict independent business organizations in China.  The U.S. business community, including USCIB, will continue to focus on investment issues in China, working to encourage the two governments to provide clear protections and real market opening for potential investors in both directions.

This entry was posted in Growth, Jobs and Open Markets, Op-Eds and Speeches and tagged China, Trade and Investment.
Modified on July 10, 2015
Posted on July 6, 2015