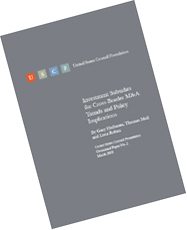 Washington, D.C., April 10, 2008 – Along with the rise of sovereign wealth funds as major actors in global business and finance, recent high-profile takeover bids by subsidized foreign firms have highlighted a number of emerging challenges in cross-border mergers and acquisitions. What are the implications when a foreign company, backed by financial support from its home government, purchases a U.S. firm? And what actions should be taken to ensure a level playing field while keeping markets open?

This is the focus of a new study published by the United States Council Foundation, the research and educational arm of the United States Council for International Business (USCIB). “Investment Subsidies for Cross-Border M&A: Trends and Policy Implications,” by Gary Hufbauer, Thomas Moll and Luca Rubini, investigates several recent cases of subsidized finance in cross-border M&A transactions and suggests corrective measures to head off the possibility of protectionist overreaction.

“While subsidized M&A or non-transparent sovereign wealth dealings do not pose a ‘clear and present danger,’ so to speak, they merit thoughtful consideration well before a political confrontation occurs,” according to Dr. Hufbauer, who detailed the report’s findings and recommendations at the National Press Club here today.

The study examines three recent instances where subsidized finance was seen or alleged to have played a significant role in an M&A transaction: the Chinese state-owned oil firm CNOOC’s bid for Unocal, the purchase of several Ingersoll-Rand divisions by Korea’s Doosan Infracore and moves by Electricité de France to expand into a number of new markets abroad.

The authors contend that subsidized M&A, if not restrained by agreed international rules, might breed costly, wasteful emulation as well as protectionist sentiment in major markets – not least the United States – especially when viewed against the sensitivities raised by the growth in sovereign wealth funds.

The appropriate response, they say, is to move toward a multilateral compact on M&A subsidies. Such a pact would be designed to increase government transparency, while drawing a line around what types of subsidies would spur review and limiting the types of retaliatory actions governments could use to counter subsidies. The authors suggest this year’s Group of Eight summit in Japan as an appropriate forum to begin discussions of such a multilateral agreement.

“Proposals to address M&A subsidies should emphasize the benefits of an open investment climate,” stated Dr. Hufbauer. “A multilateral compact will serve as a bulwark against, rather than an incentive for, protectionist legislation.”

Individual copies of the study are available free of charge from the United States Council Foundation (212-703-5063 or news@uscib.org). The study can also be downloaded in PDF format at www.uscouncilfoundation.org.

The United States Council Foundation is a private 501(c)(3) organization affiliated with USCIB. It was organized to undertake educational activities to promote the benefits of a free market economy, to demonstrate and document the role of the corporate private sector in economic growth and social development, and to advance sustainability in environmental management. More information is available at www.uscouncilfoundation.org.

This entry was posted in Press Release. Bookmark the permalink.
Modified on February 27, 2015
Posted on April 10, 2008