The presidential candidates are distorting the facts about trade and jobs. We all need to push back.

To hear many of the contenders for the White House tell it, international trade is a dead end. There have been numerous memorable quotes from both sides of the aisle that I won’t dignify by repeating here. Nearly all the candidates say the Trans-Pacific Partnership needs to be scrapped or renegotiated.

Such rhetoric, coming from politicians who use it to convince people to vote for them, is extremely disturbing. Why? Because it is distorting the facts about trade and jobs! While the anti-trade diatribes coming from the campaign trail tap into a tangible belief among many disaffected voters that trade policy and the economy in general are rigged against them, they fly in the face of a recent Gallup poll that reports that Americans continue to believe—by a wide margin, 58 to 34 percent—that international trade presents an opportunity rather than a threat.

We in the business community have a responsibility to remind people – including our political leaders – of the facts, and cut through the hyperbole. We need to speak out to help our employees, our shareholders and the communities we operate in understand that the world is growing around us, and that we cannot – nor can other countries – afford to turn inward. 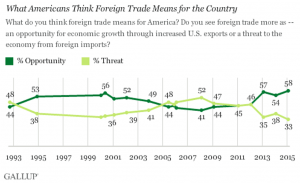 The fact is, expanded trade over the past two decades has boosted annual U.S. income by about ten percent of GDP – thousands of dollars per household – relative to what would have been otherwise. A study from the Peterson Institute for International Economics says the United States stands to be a big winner – the biggest winner – from the TPP, with income gains of some $130 billion by 2030. This growth is essential if we are to meet our goals in terms of new and better jobs, and an expanded middle class.

U.S. negotiators drove a hard bargain in the TPP talks, and – while no one, including the business community, got everything they wanted – we came away with an agreement that puts our most competitive industries, and the people they employ, in a good position for strong growth in the burgeoning Asia-Pacific marketplace. This is good news for American workers, since export-oriented companies pay, on average, 18 percent higher wages than their non-exporting counterparts.

It is also important to remember that trade liberalization serves an important geopolitical role, cementing U.S. leadership and a safer, more prosperous world – one where we can address common challenges like tackling climate change, fighting terrorism and lifting people out of poverty. In today’s world, everyone benefits when America leads.

We should take anxiety over trade seriously. But the gains from an agreement like TPP far outweigh the costs. And jobs lost to trade as a result of the agreement can and should be addressed via enhanced Trade Adjustment Assistance, something the business community has long supported. We also need to acknowledge that job dislocation is being spurred by technological advances and corresponding transformative disruptions.

An important priority will be connecting necessary skills development to the jobs of tomorrow. And as World Trade Organization Director General Roberto Azevedo has observed, increased trade, by boosting income and creating better jobs, can play an important role in raising skills and reducing inequality, both within countries and across borders.

Boosting investment for the future

To meet both the opportunities and the demands of the 21st-century economy, the United States needs a comprehensive approach to invest in enhanced competitiveness. Such an approach should encompass serious efforts to improve education and training, rebuild our infrastructure, reform the tax code and improve our regulatory environment.

We also need to invest in future agreements to open up markets for American goods and services. In this regard, it is extremely important to promote open and well-functioning investment policies and regimes. Private investment, in addition to traditional trade, will be a critical factor in the years to come.

At every opportunity, USCIB has sought to demonstrate the positive economic benefits of foreign direct investment – both inbound and outbound – for the American economy. A 2013 report by Professor Matthew Slaughter of Dartmouth, commissioned by USCIB and the Business Roundtable, demonstrated convincingly that U.S. companies who grew their overseas operations to access foreign markets exported more, and provided more and better jobs at home.

USCIB is working hard to address barriers to investment abroad, both in trade agreements like TPP and international organizations that design rules of the road for their member governments. Our members continue to face policy and regulatory barriers that inhibit entry into specific markets, and impede their ability to design, produce, market and distribute their products globally. Unlocking their ability to invest and compete abroad will be critical to American success in the 21st century, leading to sustainable enterprise and job creation.

In a recent op-ed in The Wall Street Journal, Professor Slaughter and Morton Kondracke, the former executive editor of Roll Call, posed the question: “Who will step up to tell the compelling trade story that America needs to hear?”

We, for one, will. And I hope that we can count on everyone in USCIB’s membership to join us and our partners in the broader pro-trade community, in Washington and around the world, to make the case for international trade, and for investing in the future of our country.

This entry was posted in From the President, Growth, Jobs and Open Markets, Op-Eds and Speeches, Sub Featured Story, Trans-Pacific Partnership and tagged Trade and Investment.
Posted on April 11, 2016