“Made in America” increasingly hinges on creative new ways to make goods and services in conjunction with the world. 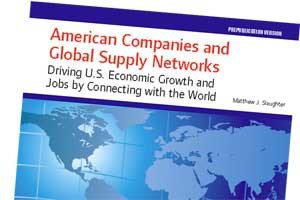 Matthew J. Slaughter, professor and associate dean at the Tuck School of Business at Dartmouth, served as a member of the Council of Economic Advisers from 2005 to 2007. His new report, “American Companies and Global Supply Networks: Driving U.S. Economic Growth and Jobs by Connecting with the World,” published by USCIB, the Business Roundtable and United States Council Foundation, is available free of charge at www.uscib.org.

Recent U.S. jobs reports, while encouraging, show that we continue to confront a competitiveness challenge of too little economic growth and too few jobs. America’s 113.2 million private-sector jobs today are not much above the number there were in late 2000, yet during these 12-plus years the U.S. labor force grew by about 15 million.

The good news is there is a future in which America can create millions of good jobs and strengthen its economic growth by seeking opportunities in global markets. Achieving this future, however, will require thoughtful U.S. policies based on a sound understanding that the success of American companies, and of the U.S. workers they employ, increasingly hinges on their global engagement.

A new report I authored for USCIB, the Business Roundtable and the United States Council Foundation, “American Companies and Global Supply Networks: Driving U.S. Economic Growth and Jobs by Connecting with the World,” explains what American companies must do to succeed in today’s dynamic global economy—and how that success fosters growth and jobs in America.

First, their success in America increasingly hinges on their venturing abroad to meet the growth in global demand that, over the past generation, has been much faster than that in the United States. The U.S. share of world GDP fell from 32.3 percent in 2001 to just 21.6 percent in 2011. American companies see vast new markets with billions of new customers to serve not just via exports but, for global companies, via foreign-affiliate sales as well. For the affiliates of U.S.-based global companies, the annual average growth in value added over 1999-2009 was 8.4 percent in Brazil, 22.8 percent in China, 24.9 percent in Eastern Europe and 26.8 percent in India. And 91.1 percent of what these affiliates produced abroad in 2009 was sold abroad, not imported back to America.

Second, successful American companies must also venture abroad to refine their operations by creating and integrating into global supply networks, which include both U.S. and foreign companies. “Made in America” increasingly hinges on creative new ways to make goods and services in conjunction with the world. One recent study estimated that the foreign content of U.S. exports has tripled in the last 40 years, rising from about 7 percent in 1970 to 22 percent in the late 2000s—with a much sharper rise since 1990. A very important implication of America’s engagement in global supply networks is not just rising exports but rising imports as well. In 2011 fully 62 percent of America’s $2.2 trillion of goods imports were intermediate inputs that were used in America by American workers.

Third, even amidst all this global outreach, globally engaged U.S. companies are fundamentally American companies whose activities drive economic growth and well-paying jobs in the United States. Global companies operating in the United States in 2010 employed 28.1 million Americans, at average compensation about one third above the national average. They performed $253.8 billion in research and development. They invested $587.3 billion in property, plant, and equipment. They bought from U.S. suppliers more than $8.0 trillion in goods and services. And these companies are richly diverse in size and industry. Today about 26 percent of the U.S.-parent companies of all U.S.-based multinationals are classified by the U.S. government as small businesses because they employ fewer than 500 people.

The global engagement of U.S. companies tends to boost, not reduce, hiring, investment, and R&D in America. Research continues to show that more employment and investment abroad by U.S. multinationals tends to increase employment and investment in their U.S. operations. Globally engaged U.S. companies also create jobs in other American companies. In particular, they create jobs in small and medium-sized American enterprises that become part of their global supply networks. The U.S. parent enterprise of the typical U.S. global company buys more than $3 billion in intermediate inputs from more than 6,000 American small businesses, which was more than 24 percent of its total input purchases. All this job creation is dynamic, with many companies both expanding and reducing jobs as opportunities evolve.

My report uses a mix of economic data, academic and policy research and case studies that detail how the success of globally engaged U.S. companies, their customers and suppliers, as well as the U.S. workers they all employ, increasingly depends on their competitiveness in the global marketplace. The companies profiled are The Dow Chemical Company, The Coca-Cola Company, ExxonMobil, FedEx Corporation, IBM, Procter & Gamble and Siemens.

There is no single strategy for what American companies must do to succeed and create jobs when venturing abroad. To stay ahead of intense international competition American companies must create, implement, and refine strategies from a truly global perspective. Globally engaged U.S. companies need flexibility to experiment, learn, fail, adjust, and succeed.

To support American growth and jobs, U.S. policies must help all companies in America—big and little, U.S. and foreign, young and old—compete globally. Such sound policies are not guaranteed. But, if based on a clear understanding of what U.S. companies must do to succeed in today’s global marketplace, they are no doubt attainable.

This essay appeared in the Spring 2013 issue of International Business, USCIB’s quarterly journal. It is part of our regular series of thought-leadership columns. To submit a column or suggest a topic, please contact Jonathan Huneke (jhuneke@uscib.org).

This entry was posted in Big Idea, Communication Department and tagged Trade and Investment.
Modified on January 3, 2017
Posted on May 1, 2013