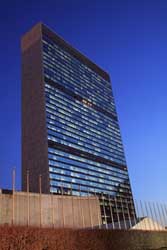 The United Nations has embarked on an ambitious effort to define forward-looking objectives to succeed the Millennium Development Goals (MDGs), which the UN adopted in 2000 and which set 2015 as a deadline to reach targets toward ending extreme poverty, ensuring universal primary education, curbing the spread of infectious diseases, and attaining a number of other fundamental goals. (See USCIB President and CEO Peter Robinson’s Spring 2013 column.)

Many may roll their eyes and think, “There they go again – the UN with its hand out, dreaming up ways to waste money.” However, we believe this exercise represents a unique opportunity to catalyze the international community around the importance of private sector-led growth and a more robust, inclusive global economy. The business community needs to be a driving force in this vitally important debate.

It is important to recognize just how far we have moved from the old model of development policy, which relied largely on official development assistance (ODA) by governments. In the four decades following World War II, ODA made up 70 percent of the resources flowing from developed to developing countries, while just 30 percent came from private investment. But the levels of private investment in developing countries surged with the global economic boom of the 1990s, and by the end of the century, that ratio was reversed. Today, over 80 percent of capital flows to developing countries come from private investment, while the share from ODA continues to fall (to say nothing of the additional contribution of in-country investment by indigenous companies, particularly in rapidly developing economies such as China or Brazil).

This shift is well documented and widely acknowledged, yet previous discussions of development in the UN, including the MDGs, has largely focused on ODA, with private investment – and the conditions that facilitate it – getting little, if any, attention. The MDGs have been criticized as, in effect, a debate over where to target aid rather than how to generate economic growth. To be sure, assistance to the least developed countries is critically important. But in our view, the post-2015 development agenda is a unique opportunity to drive progress for economic and development advancement in all countries.

In addition, the international community and global business now recognize the importance of integrating broader environmental, economic and social elements in the wider concept of sustainable development. This goes far beyond a narrow focus on ODA. The post-2015 development agenda provides a window for us to achieve consensus – individuals, governments, businesses, indeed all stakeholders – around the essential elements of sustainable development in the 21st century.

This approach calls for development goals that promote national policies and institutions that will lead to peace and security, good governance, economic growth, environmental protection and social progress – the mutually reinforcing objectives of sustainable development. Global goals are useful, but we must recognize that all the key drivers for development take place within a national context and must be implemented through national institutions.

The Millennium Development Goals were a good start, but they left out many important framework issues, such as peace, security and good governance. Good national governance, including the rule of law, accountable government, independent courts, individual liberty, the absence of corruption, clear property rights and functioning national institutions are all prerequisites to sustained growth and sustainable development.

Private investment and economic growth cannot and will not happen in the absence of a conducive environment at the national level, which must include sound macro-economic and fiscal policies, adequate infrastructure, communication and education systems, and efficient business regulations in the areas covered by the World Bank’s influential Doing Business reports. Efficient business regulations support entrepreneurship and recue the untaxed informal economy. Moreover, the lack of clear property rights – for both enterprises and households – remains the single biggest impediment to reducing informality.

4) Focus on entrepreneurs and enterprises

Any discussion on employment must focus primarily on enterprises. There is universal agreement on the urgent need for job creation, but far too little focus on who will actually create the jobs. So we must always finish that sentence, emphasizing the urgent need for jobs to be created by enterprises. Increased employment is the outcome of policies that promote entrepreneurship and support enterprise creation, particularly small and medium-sized enterprises, which are the main engines of job growth in every country.

5) Harness the business case for development

Put most simply, development is good for business, and business is good for development. The vast majority of potential consumers live in the developing world, and companies recognize that their future growth and competitiveness hinges on the ability to address the needs of developing economies. At the same time, economic growth is one of the most powerful drivers of poverty reduction in the world, and business is the most reliable engine powering that growth. Harnessing this virtuous circle is the best path to sustainable growth.

The business community is actively seeking to help shape the SDG and the broad post-2015 agenda. USCIB and its global network – the International Chamber of Commerce, the International Organization of Employers, and the Business and Industry Advisory to the OECD – have engaged with the UN secretariat and member states in an effort to secure truly ambitious and effective targets for private sector-led growth and the achievement of other critical societal goals. Only by working together can we ensure that the 21st century is truly the century of broad, sustained development for all the peoples of the world.

Adam Greene is USCIB’s vice president of labor and corporate responsibility; Norine Kennedy is USCIB’s vice president for strategic international engagement. This essay appeared in the Autumn  2013 issue of International Business, USCIB’s quarterly journal. It is part of our regular series of thought-leadership columns. To submit a column or suggest a topic, please contact Jonathan Huneke (jhuneke@uscib.org).

This entry was posted in Big Idea, Communication Department. Bookmark the permalink.
Modified on January 29, 2015
Posted on September 1, 2013