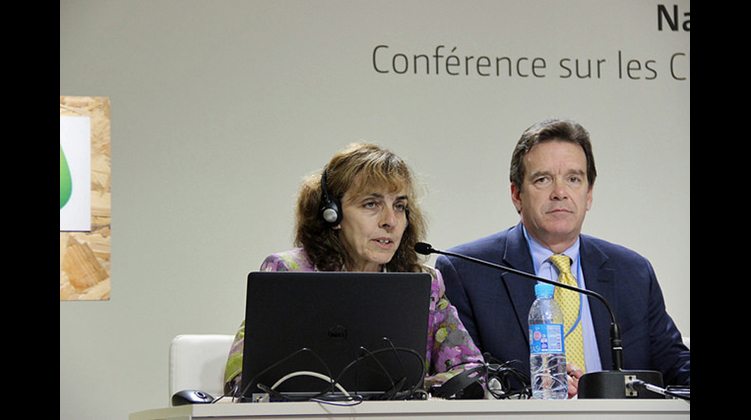 Norine Kennedy and Peter Robinson speak at a press conference on December 9 at COP21 in Paris. 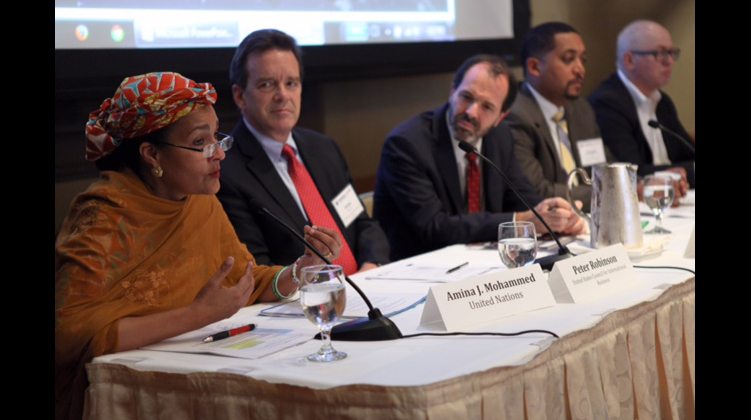 Ronnie Goldberg unveils the Business for 2030 website at the Global Employers’ Summit in Bahrain. 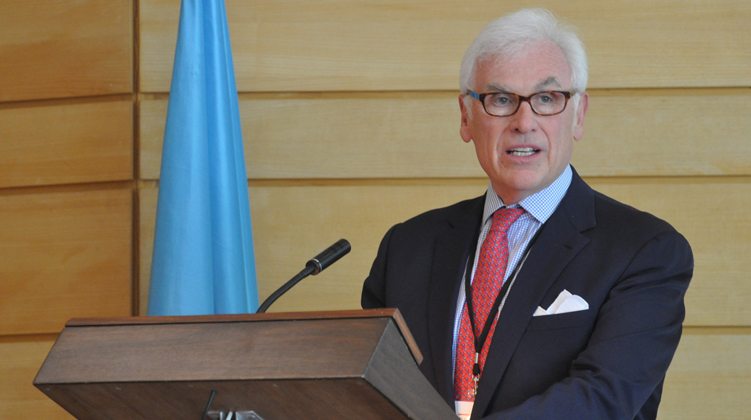 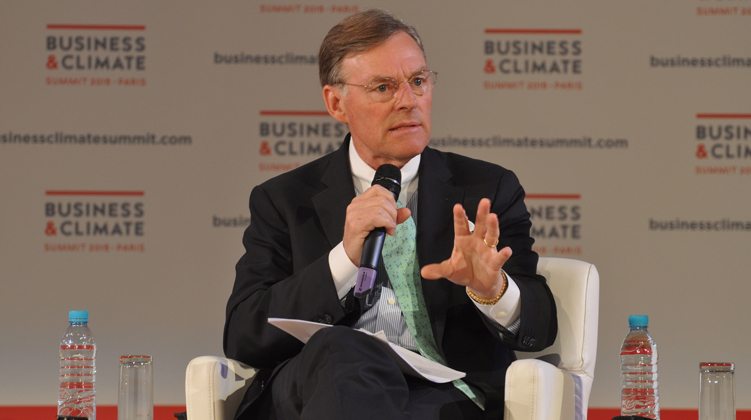 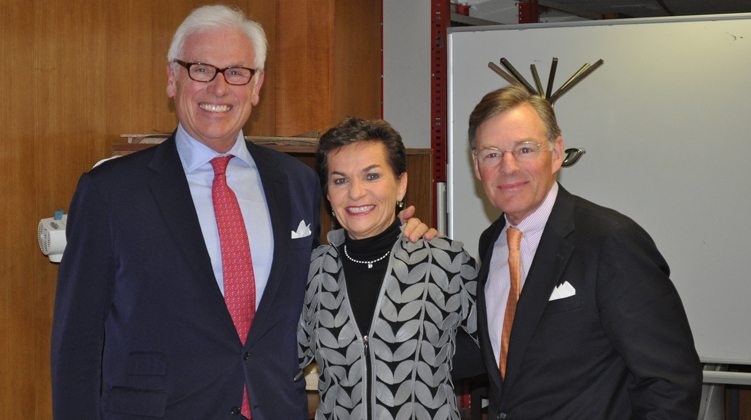 As United Nations members gather in New York to sign the Paris Climate Agreement and discuss follow-up on the Sustainable Development Goals (SDGs) agreed last year, we thought it timely to recap some of the activities USCIB and its global network undertook in 2015 in support of these pivotal initiatives:

USCIB convened the North American Business Consultation  on Climate Change on June 23 in Washington, D.C.; this session, organized with the International Chamber of Commerce, the Canadian Chamber of Commerce and the International Emissions Trading Association, highlighted U.S. and Canadian business priorities for the U.N. climate agreement to be finalized in Paris this December.

In his opening comments to the day-long conference, with over 80 participants including government officials, business leaders, United Nations delegates, and academics, USCIB’s President and CEO, Peter Robinson stated: “USCIB has followed climate change for 20 plus years, and while the issues have evolved, become broader, been through ups and downs in the U.N. negotiations, it has remained a priority for member companies.  And en route to Paris, we see it evolving again, to include a strong element of corporate citizenship and social equity.”

Last year, the United Nations agreed to an ambitious 2030 Sustainable Development Agenda, a grand vision for sustainability that will reshape the practice of development globally, as well as the private sector’s role in building a more prosperous, healthy world. USCIB is deeply engaged in all aspects of Agenda 2030, advocating for good governance and the rule of law, inclusive economic growth, investment in infrastructure, enabling environments to foster innovation, strong public-private partnerships and above all, an open channel for business input into policy negotiations and implementation at the international and national levels.

In September 2015, USCIB officially launched its well-received Business for 2030 web portal, a catalog of business engagement that showcases the private sector’s contributions to the SDGs. Business for 2030 features over 140 initiatives from 35 companies in over 150 countries of how businesses are helping to achieve 72 of the 169 SDG targets. In addition to educating the business community about the 2030 Agenda for Sustainable Development and the SDGs, the website highlights concrete initiatives and public-private partnerships to inspire renewed trust in the private sector, and to catalyze sustained and active business engagement in the 2030 Agenda for Sustainable Development. Through its blog and Twitter presence, the site also targets business perspectives to the UN community to sensitize them to business perspectives on SDG priorities and implementation.

USCIB attended the 2nd Innovation for Cool Earth Forum (ICEF2) on October 6-7 in Tokyo.  ICEF2, convened at the initiative of Japanese Prime Minister Shinzo Abe, focused on promoting technological innovation as a means to address climate change. The two-day forum brought together 1,000 researchers, business representatives and policymakers from around the globe to present a broad range of innovative technologies, and discuss what innovative measures should be developed, how the innovation should be promoted, and how cooperation and public private partnership should be enhanced.

Private-sector representatives from around the world endorsed the conclusion of an ambitious and comprehensive worldwide agreement to reduce greenhouse gas emissions and strengthen resilience, while advancing energy access and security in the context of sustainable development.

During a December meeting at the headquarters of the French business federation. MEDEF, company executives and business federation officials from more than 20 countries agreed on a joint declaration stating: “Climate change is a common responsibility for all stakeholders, including for businesses in every part of the world, of every sector and every size, large groups and SMEs.”

In December 2015, the United Nations concluded what was possibly the most important environmental meeting in history, when 194 countries agreed to a long-term climate treaty designed to curb global greenhouse gas emissions. The climate negotiations in Paris (COP21) saw unprecedented support and involvement from the business community, with USCIB and member companies on the ground at COP21 to demonstrate their commitment and stake in the accord.

Thanks to sustained advocacy from USCIB and other business organizations, the final climate agreement recognizes the need for enabling investment frameworks in global markets, as well as policies necessary to mobilize business innovation across all borders. Innovation, enabling frameworks for cost effective and scientifically sound policy design, and the need to work with business in partnerships are priorities for USCIB’s ongoing involvement in UN environmental work.