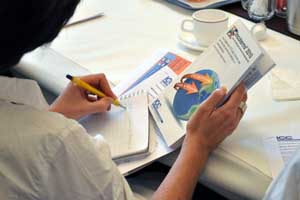 The latest version of the Incoterms® rules, standard commercial terms from the International Chamber of Commerce (ICC) for use in contracts for the sale of goods, have been officially endorsed by the United Nations Commission on International Trade Law (UNCITRAL), confirming their position as the global standard for international business transactions.

UNCITRAL, whose mandate is to remove legal obstacles for international trade, applauded ICC for its “valuable” contribution to facilitating the conduct of global trade by making the Incoterms® 2010 rules simpler and clearer, reflecting recent developments in international trade.

Based in Paris, ICC is the world business organization that forms part of USCIB’s global network. The endorsement was published after UNCITRAL’s 45th session in New York, with a decision to “commend the use of Incoterms® 2010, as appropriate, in international sales transactions.”

“We are thrilled to have the continued support of UNCITRAL, one of the most renowned and influential organs dealing with international business,” said Emily O’Connor, senior policy manager of the ICC Commission on Commercial Law and Practice.

The Incoterms® rules, developed by experts and practitioners brought together by ICC, are used worldwide in international and domestic transactions for the sale of goods. ICC first defined the Incoterms® rules in 1936, and has since revised the rules a number of times. The latest version came into effect in January 2011.

The Incoterms® rules have been recognized by UNCITRAL since the 1960s as the global standard for the interpretation of the most common terms in foreign trade. They have had the support of many international organizations, notably the United Nations, not only through UNCITRAL but also through the United Nations Economic Commission for Europe (UNECE), whose Centre for Trade Facilitation and Electronic Business recommends the use of the Incoterms® rules.

To order a copy of Incoterms® 2010 and related titles, visit the USCIB International Bookstore.