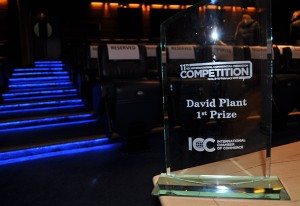 After six days and 147 rigorous and fast-paced mock mediation sessions, the University of New South Wales’ Katherine Mackellar, Connor Taylor, Roshan Evans and Self Rumbewas have been crowned as the winners of the 11th ICC International Commercial Mediation Competition, which was held on February 10 in Paris at the Maison du Barreau.

The final capped off an exciting Mediation Week that originally began with 65 teams from 32 countries who put their problem-solving skills to the test in real cross-border commercial dispute scenarios. However, it was the efforts of the University of New South Wales (Australia) that turned out to be the most victorious against Auckland University (New Zealand). Two U.S. schools – Cornell Law School and Pepperdine University – qualified for the competition’s quarterfinals.

The final problem was drafted by Rosemary Jackson, who is part of an international working group of mediation experts. It involved a dispute between a world-renowned pastry chef and an exclusive caterer to the stars with a failed icing situation. The bittersweet issue was observed by 350 spectators.

The winners not only walk away with coveted internships at the International Chamber of Commerce (ICC) International Centre for ADR, as well as the Centre for Effective Dispute Resolution as part of the Competition’s prize, but an ample amount of first-hand experience, advice from and connections with world renowned mediators.

The team, which was headed by Competition veteran, Rosemary Howell, was selected for their communication skills, strong presence and teamwork after a thorough selection process that included an interview, written application and several other examinations.

“It is my last year at university, so it is an incredible high note to go out on,” said Mackeller who represented her team in the final.

“My sincere congratulations go out to everyone who participated in this year’s Mediation Competition,” said Andrea Carlevaris, director of ICC’s dispute resolution services and secretary general of ICC’s International Court of Arbitration. “We certainly hope that all students will return home having forged some exceptional connections in addition to having further built upon their already outstanding skills and knowledge in support of mediation as an alternative form of dispute resolution.”

This entry was posted in Arbitration, ICC, News Stories. Bookmark the permalink.
Modified on November 13, 2017
Posted on February 11, 2016