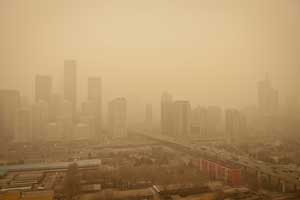 At this month’s U.S.-China Strategic & Economic Dialogue (S&ED) in Washington, D.C., the two countries agreed to undertake a number of steps to address climate change. This followed an announcement that the two nations will begin formal talks on a high-standard bilateral investment treaty (click here for our earlier report).

In May, the USCIB China Environment Task Force met with the EPA’s Steve Wolfson to discuss coordination and capacity-building between China and the U.S. on climate change, including Secretary of State Kerry’s newly created U.S.-China Climate Change Working Group.

On July 10, the working group presented its report on bilateral cooperation between the two countries. This non-binding climate plan lays out five new action initiatives with the goal of reducing greenhouse gas emissions and air pollution by tackling the largest sources of emissions in both countries, focusing on: vehicle emissions; smart grids; carbon capture, utilization and storage; greenhouse gas data collection and management; and building and industry energy efficiency.

In a fact sheet, the U.S. Department of State released the following details of specific projects and commitments.

In their joint report, the two parties made clear that this just the beginning of a new phase in U.S.-China cooperation on climate change issues, where the Climate Change Working Group is designed to serve as the new leader in this critical bilateral relationship. Working closely with private sector and non-governmental stakeholders, the working group will develop implementation plans for the following initiatives by October 2013, with the goal of continuing to find new ways to expand cooperation on climate and clean energy issues.