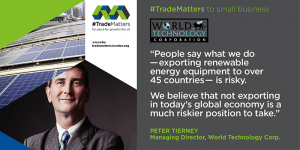 International trade has gotten a bad rap in the U.S. electoral campaign and elsewhere around the world. Pushing back against the misconceptions around global trade is a key focus of the #TradeMatters campaign from the International Chamber of Commerce. A key feature of the campaign are testimonials from entrepreneurs and small business owners around the world explaining why trade matters to them, and how governments could make cross-border trade easier for small business.

World Technology Corporation, a New York-based exporter of environmentally friendly technologies, was recently featured in the campaign. Peter Tierney, the company’s managing director, said in his contribution to the campaign: “Exporting has helped our company stabilize its sales and provided a financial cushion during the last recession. People say what we do – exporting – is risky. We believe that not exporting in today’s global economy is a much riskier position to take.”

You can view World Technology’s posting on the ICC website here.