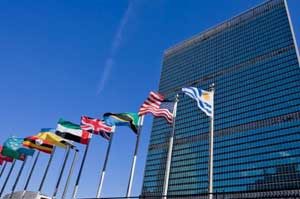 Here in New York, September was a high-profile month, not only for heads of state, but also for business where USCIB, along with our colleagues at the International Chamber of Commerce (ICC), was in the thick of things during the United Nations General Assembly.

Prior to the opening of this year’s session, country leaders and other important actors gathered for two events of critical importance for business: UN Climate Week and the Sustainable Development Goals (SDGs) Summit. After two years of slow-moving and intricately detailed negotiations, countries agreed the UN 2030 Development Agenda, which includes 17 Sustainable Development Goals. They also highlighted the critical importance of a successful outcome at this December’s UN Climate Summit in Paris.

In both these arenas, USCIB has been involved every step of the way. It is clear that both initiatives will impact the private sector, while also providing many opportunities for business to contribute. Because of this, our stepped up advocacy and communications activities this year on both climate change and the SDGs have been carefully planned and strategically managed under our Campaign 2015 initiative.

Our key messages have been consistent – as well as insistent. Both in the negotiations leading to the SDGs and in the climate change negotiations, we have underscored the need for business to be embedded in the process. This is necessary to leverage the full resources that we can bring to the table – through investment, innovation and know-how. We have also sought to ensure that expectations of the private sector’s contributions are reasonable, and in line with business and economic realities. I believe this steady drumbeat of private-sector messaging is beginning to pay off.

I am especially proud of the launch of our Business for 2030 web portal, which makes a critical contribution to the 2030 Agenda by showcasing corporate programs and initiatives supporting each of the 17 SDGs (see page 3). Co-sponsored by Bechtel, MasterCard and IFPMA, our event attracted a diverse, standing-room only crowd of corporate, governmental, IGO and NGO representatives. We were honored to have UN Ambassador Amina Mohammed, the architect of the Sustainable Development Goals, as our opening speaker. Another leading figure in international development, Erik Solheim, executive director of the OECD Development Committee, delivered closing comments.

The Business for 2030 portal has already received widespread acclaim, and it has been designated by the UN as an official portal for identifying corporate contributions to the SDGs. This is a remarkable contrast to the “cold shoulder” business got in the development of the Millennium Development Goals 15 years ago.

All eyes now on implementation – and on Paris

USCIB has worked closely with the UN system, the U.S. government and other business groups to shape the SDGs, and has identified priority issues for business attention and engagement. To date, however, the access and involvement afforded business in the deliberations has not been commensurate with the high expectations for private-sector resources and action. We are working to change that as attention now shifts to putting the SDGs into practice at the national level.

I have been extremely impressed with the commitment and determination shown by USCIB members to help guide and inform the UN’s work on the 2030 Development Agenda. Special thanks and recognition go to Ann Condon of GE, chair of USCIB’s Environment Committee, and to Tam Nguyen of Bechtel and Brian Lowry of Monsanto, co-chairs of our SDGs Working Group.

The new UN agenda will shift the terrain for much of USCIB’s work, and we appreciate the encouragement and support we have received to continue to take a pro-active role, expressing USCIB’s vision and raising USCIB’s visibility. We will continue to work hard to inject business views into the implementation phase, especially at the national level, utilizing USCIB’s unmatched global business network.

We are now gearing up for the next critical step in the Campaign 2015 program: the COP21 climate negotiations in Paris. In October, I helped represent U.S. business in Tokyo at the Second Innovation for Cool Earth Forum (ICEF2), a high-level conference organized by the government of Japan for business, government and academics to discuss the important role of innovation and technology in addressing climate change. While in Tokyo, I also participated in the High Level Business Dialogue organized by Laurence Tubiana of the government of France; the invitation to join this influential consultation with government ministers on technological solutions and their deployment is further recognition of USCIB’s reputation and expertise in the process. We also participated in the final round of UN climate negotiations in Bonn.

And now it is on to Paris!

This entry was posted in Business In Society, From the President, Sustainable Development and tagged Climate Change, Environment.
Modified on November 19, 2015
Posted on November 1, 2015