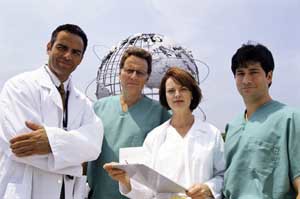 Ahead of the World Health Assembly later this month where the World Health Organization (WHO) will deliberate on its Framework for Engagement with Non-State Actors, USCIB attended a stakeholder listening session at the U.S. Department of Health and Human Services in D.C. to urge the United States government to fight against business discrimination in the WHO’s framework.

Helen Medina, USCIB’s vice president for product policy and innovation, spoke at an HHS listening session held to solicit knowledge, ideas and feedback from all stakeholders – including private industry – as the U.S. positions itself to negotiate with other countries at the upcoming World Health Assembly.

USCIB previously stated its concern that the proposed WHO Framework for Engagement with Non-State Actors is too stringent, as it would limit the WHO’s ability to fully benefit from the private sector’s practical expertise, resources and research. The sheer scale of global health challenges, such as the recent Ebola crises and the growing incidences of non-communicable diseases which are responsible for 60 percent of the world’s premature deaths, require everyone to be on board to address world health, including business.

“We must bring forward and catalyze partnerships that connect across what many call the ‘Golden Triangle’ of business, government and civil society,” Medina said at the HHS listening session. “For this reason, we are extremely concerned about aspects of the recently proposed Framework. As currently drafted, it will undermine the ‘Golden Triangle’ concept by discriminating against and even banning business.”

USCIB called on American negotiators headed to the World Health Assembly to consider the following messages:

This entry was posted in Business In Society, News Stories and tagged Health Care.
Modified on February 22, 2017
Posted on May 8, 2015